Cork City will look to make it two wins in quick succession as they welcome Drogheda United to Turner’s Cross.

John Caulfield’s side bounced back from two games without a win to claim three points against Sligo Rovers on Friday night, a result which saw them go back above Shamrock Rovers into second place.

City’s home record this season shows five wins from the six ties they have played at Turner’s Cross, with the recent defeat to Dundalk the only tie they have failed to win.

The visitors are in ninth place in the table, having recorded a 4-2 win over Bray Wanderers on Friday night, their first win since the second weekend of the season.

On their travels this season, Drogheda are without a win since a 1-0 success over Bray on the opening day of the season, though they claimed a point in a 2-2 draw away to St Pat’s and only lost out, by the narrowest of margins to both Dundalk and Shamrock Rovers in recent weeks.

The most recent meeting between the sides saw City claim a 2-1 win away to Drogheda last month.

Two goals in two minutes from Billy Dennehy and Kieran Djilali put City into a first-half lead, but a Lloyd Buckley goal on 77 minutes made for a nervy finish.

That was City’s sixth win in a row against Drogheda; however only one of those wins has been by more than one goal. The last meeting between the two at Turner’s Cross took place last October, with John Dunleavy and Mark O’Sullivan giving City a 2-0 lead, before Declan O’Brien halved the deficit.

Cork's Ross Gaynor remains sidelined with the knock that ruled him out of Friday’s win over Sligo, while Alan Bennett and John Dunleavy are also ruled out. Those three aside, the City boss expects to have a full squad available to him.

Drogheda picked up their first win in ten games last Friday as they defeated Bray Wanderers 4-2 in a game where a couple of tactical tweaks at half-time made the difference according to Drogheda manager Johnny McDonnell. United had only picked up two points from the last 27 available though last Friday’s result has lifted them up to ninth in the table despite not getting the desired results.

Midfielder Stephen Maher will be missing for United through suspension though he would have been unavailable regardless due to a knee injury. Neil Yadolahi is the only other absentee. 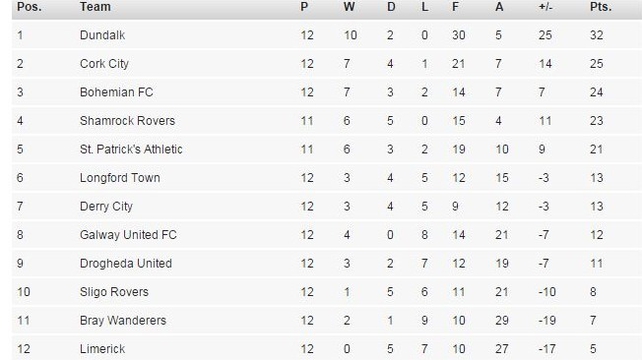 The Saints will be hoping for a reversal in fortunes against the Hoops after their opening day 1-0 defeat in Tallaght Stadium, with the added incentive that a win would also lift them above Pat Fenlon's side in the league standings.

For the Hoops, a win would see them continue to put pressure on league leaders Dundalk.

In team news, the Saints welcome Sean Hoare back into the squad after he missed out due to illness. Liam Buckley is hopeful over the fitness of both Christy Fagan (knee) and Ger O'Brien (hamstring), but both will face late fitness tests. Togo international Cyril Guedje remains out with a hamstring injury.