Celtic's Europa League campaign came to a frustrating end with a 1-0 defeat by Inter Milan at the San Siro after Hoops defender Virgil van Dijk was dismissed in the first half.

The Scottish champions were more than holding their own until the defender was sent off by referee Ivan Kruzliak in the 36th minute after picking up two yellow cards.

It was an uphill task for Ronny Deila's side thereafter and they never really came close to getting the vital goal before Fredy Guarin drilled in a wonderful strike with two minutes remaining to make it 4-3 on aggregate and take a rather unconvincing Serie A side into the last 16.

The Hoops will turn their attention to the visit of second-placed Aberdeen on Sunday in a match which will go some way to deciding the destination of the Scottish Premiership title.

They face Dundee United in the William Hill Scottish Cup quarter-final and Scottish League Cup final next month as the quest for the domestic treble continues. With regards Europe, however, it will be a case of might have been had van Dijk stayed the course.

Celtic had been stung by the loss of an early goal in the first leg and there were only seconds gone when Xherdan Shaqiri set up Mauro Icardi with a through-ball which split the visiting defence.

However, there was not enough power in the forward's angled shot to worry Parkhead keeper Craig Gordon.

In the seventh minute winger Gary Mackay-Steven, back in the side along with Stuart Armstrong and Adam Matthews, should have given Celtic the lead when he found himself with only Juan Pablo Carrizo to beat after being played in by left-back Emilio Izaguirre.

The former Dundee United player seemed to have almost too much time and blasted his shot against the legs of the Inter keeper.

There was a penalty shout for Celtic when Armstrong went down inside the box under a challenge from full-back Davide Santon but Kruzliak was unimpressed.

The visitors had grown in confidence as the first half unfolded but their momentum was halted when Van Dijk was sent packing.

The Dutchman, booked earlier for a foul on Rodrigo Palacio, clashed with Icardi down the flank and Kruzliak dug into his pocket for another yellow, followed by the red. Defender Efe Ambrose replaced Mackay-Steven as Delia reshuffled.

The Celtic rearguard came under severe pressure just before the break and some last-gasp defending, including a fine save by Gordon from Danilo D'Ambrosio, kept their goal intact.

Inter midfielder Hernanes tested Gordon early in the second half with a drive from distance before the Scotland keeper made another point-blank save from Icardi.

James Forrest replaced the tiring John Guidetti, in from the first leg for the injured Leigh Griffiths, in the 58th minute in order to give the visitors some pace on the counter.

The tension slowly increased and Shaqiri stretched to miss with a header from close range before Gordon was booked for time-wasting at a goal kick.

Armstrong made way for Kris Commons with 10 minutes remaining but the Hoops could not get up the park to trouble Carrizo, and Guarin extinguished all hopes with a thunderous drive from 25 yards. 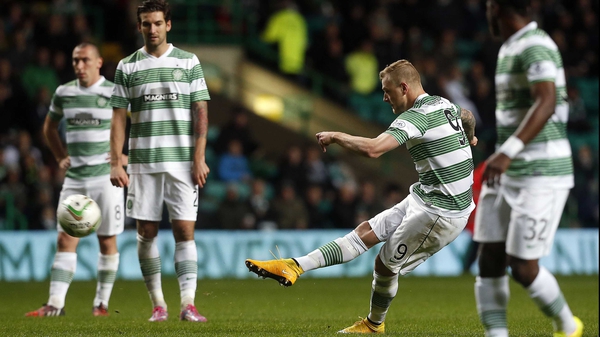