The Colombia international blasted against the woodwork as time ran down with the Black Cats, who played the final 24 minutes without £10million midfielder Jack Rodwell after he was dismissed for a second bookable offence, teetering on the brink.

Until that point, the Black Cats had looked the more likely winners after emerging from their early torpor with keeper Marcus Bettinelli making three saves from new boy Jermain Defoe inside 10 second-half minutes to secure a 0-0 fourth round draws.

Sunderland were desperately poor for long periods, although they rallied belatedly to put the visitors under pressure as time ran down.

However, it all proved to be too little too late as head coach Gus Poyet was left with a replay he did not really want, while opposite number Kit Symons headed home with plenty to be pleased about.

There was warm applause for Defoe when his name was announced, and a relatively sparse crowd at the Stadium of Light settled down hoping to see him fulfil his billing as the missing ingredient in Poyet's plan.

In the event, they saw the 32-year-old endure a largely anonymous first half in which he rarely saw the ball as the Uruguayan's 3-5-2 formation failed to click during a drab opening 45 minutes.

Indeed, the former Toronto striker's most telling contribution of the half was to unwittingly block team-mate Patrick van Aanholt's 42nd-minute shot with his face.

The Black Cats started brightly with wing-backs Billy Jones and Van Aanholt getting forward well, but they soon wilted as Fulham worked their way into the game.

In truth, neither side was able to create much of note with Bettinelli kicking away Sebastian Larsson's 33rd-minute drive and Steven Fletcher looping a tame header over the bar five minutes before the break.

Indeed, the most notable incident of the first half was a Rodwell tackle on Stafylidis with several studs on show which resulted in a booking.

The home side returned in determined mood and pinned the visitors back in an early flurry, although the initial impetus soon abated and it was Fulham who went close six minutes into the half when midfielder Seko Fofana wrong-footed defender Santiago Vergini and fired across the face of goal and just wide of the far post.

With the home fans among a crowd of just 22,961 starting to voice their frustration and the Londoners sensing an opportunity, the game opened up and Defoe was presented with his first half-chance, a long-range effort which he screwed well wide of the target.

The Black Cats forced a series of corners as they started to gain the upper hand, but they were unable to make the most of the pressure as Fulham defended manfully.

However, Bettinelli had to bundle Defoe's 62nd-minute volley around the post after he connected with Jones' right-wing cross six yards out, and the keeper came to the rescue once again after the striker got a toe to Rodwell's scuffed shot three minutes later.

That proved to be Rodwell's last contribution to the game when he was booked for a second time for preventing the keeper from throwing the ball out seconds later.

Bettinelli denied Defoe once again from distance with 18 minutes remaining and Van Aanholt drive a rising effort just over the bar six minutes later as the home side made their final push.

Connor Wickham tested Bettinelli with a fiercely-struck 82nd-minute effort, although it was fellow substitute Rodallega who closest to a winner when he rattled the post from 25 yards with four minutes remaining. 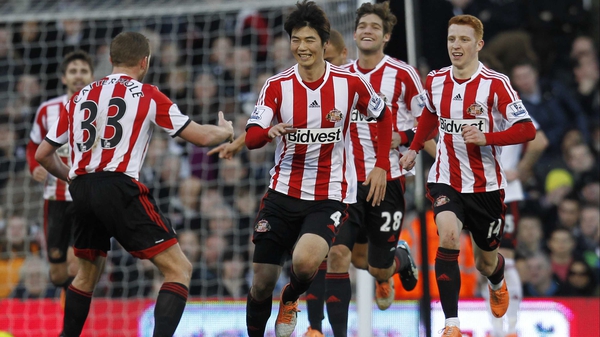