Second-half substitute Dusan Tadic stroked the ball calmly past David de Gea in the 69th minute to give Saints a 1-0 result at Old Trafford.

A near full-strength United, who started with Angel di Maria up front, were poor all afternoon and rarely looked like beating Fraser Forster in the away goal.

Their case was not helped when Robin van Persie hobbled off with an injury in the second half.

United's tempo was slow, their crossing poor, and they were out-muscled by a disciplined and organised Southampton defence which registered its tenth clean sheet of a remarkable season that has exceeded all expectations.

Having lost a raft of players in the summer, Saints were touted as relegation contenders, but now, incredibly, they are third in the Barclays Premier League having leapfrogged United because of this win.

The theory that Saints are not good enough to mix it with the big boys was shot down here.

The south-coast club felt hard done by when they lost 2-1 to United last month and they just about deserved to get their revenge here.

And Koeman, who fell out with Van Gaal during their time together at Ajax, enjoyed breaking United's 11-match unbeaten run more than anyone, punching the air with glee when Tadic hit the winner which consigned United to their second home defeat of the season.

Van Gaal spoke on Friday of his desire to make United the best team on the planet.

It would be hard to imagine that the likes of Chelsea or Real Madrid were quaking in their boots after United's first half display, though.

Southampton had the better of the early exchanges.

Nathaniel Clyne, who has been linked with United, exchanged passes with Graziano Pelle and sneaked into the box but he dragged his shot wide.

The home fans were far from enchanted by what they were seeing.

United were slow at moving the ball forward and they could not get the ball out wide.

Di Maria, playing up front alongside Van Persie, worked hard and won a free-kick after being fouled by Morgan Schneiderlin, but United wasted the free-kick.

Michael Carrick did well to nod a long high ball behind under pressure from Jose Fonte as Saints continued their impressive start.

The visitors were forced into an early change though when Toby Alderweireld was replaced by Florin Gardos after suffering a thigh injury.

Forster was called into action for the first time after 28 minutes when he collected Daley Blind's chip, which sailed narrowly over Di Maria's head.

The United fans were getting annoyed with their team and it was easy to see why. Antonio Valencia and Di Maria both failed to clear the first man when they were given time to cross.

There was a slight improvement just before the break. Van Persie's deflected shot drew a save from Forster and Di Maria fired wide from long-range.

United still struggled to create any decent chances straight after the break.

When Di Maria got a sight of goal, Gardos stuck his leg out and denied the Argentinian.

Chris Smalling was fortunate not to give away a penalty as he pulled Pelle's shirt in the box. It was not the first time the England defender had been guilty of such an act.

Van Persie let his frustrations get the better of him. He lashed out at Fonte to earn a booking.

The Dutchman then suffered an injury and was replaced moments later by Ander Herrera.

Former Southampton left-back Luke Shaw was surprisingly booed by the Saints fans when he was replaced by Tyler Blackett, but the away supporters were rejoicing soon after when their team took the lead.

Tadic, who had only been on the pitch for six minutes, calmly slotted the ball past De Gea after Pelle's shot rebounded off the post into his path.

The Serbian removed his shirt in a joyous celebration and Koeman sprung from his seat to celebrate on the touch line.
Juan Mata blasted a low shot wide and then somehow missed from five yards.

Despite five minutes of injury time, United could not score and Koeman's men went on to claim a morale-boosting win. 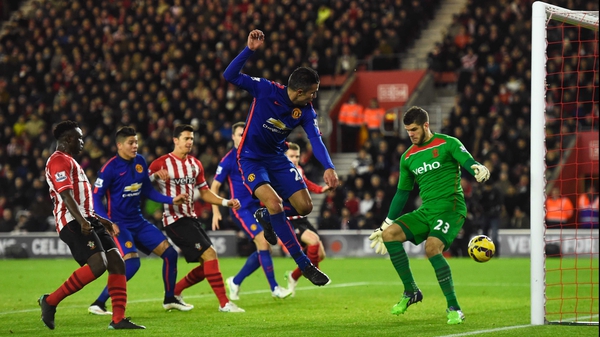