Claudio Ranieri has paid the price for Greece's embarrassing home defeat to the Faroe Islands, according to reports.

The veteran Italian coach has lost his job the day after a 1-0 European Championship qualifying loss to the minnows in Athens.

The writing appeared to be on the wall immediately for the 63-year-old, who only took the job in the summer and has been in charge for four games.

In a statement on the Hellenic Football Federation's website, HFF president Giorgos Sarris admitted he was sorry for ever hiring Ranieri .

"Following today's devastating result for the national team, I take full responsibility for the most unfortunate choice of coach, which has resulted in such a poor image of the national team being put before the fans," Sarris said.

"The governing board will convene and take responsibility among all the members to make the necessary changes needed to avoid a repeat of such an embarrassing night."

And a statement carried on FIFA's official website on Saturday said Ranieri had now had his deal terminated and would leave after Tuesday's friendly with Serbia. The HFF has still to announce the decision formally.

Another of Ranieri's games in charge ended with an equally-surprising home loss to Northern Ireland, making it an even more disastrous spell.

Speaking after the loss to the Faroes, Ranieri - who left Monaco at the end of last season - was at a loss to explain the defeat.

"I have no words to explain what happened," he said in comments reported on uefa.com.

"We all wanted to record our first victory in the group. But the Faroese deserved to win as they created more chances to score. Only hard work can get us out of this situation.

"When the qualifiers started nobody believed we would find ourselves in this situation. We were wrong in believing that was a straightforward group for us.

"All defeats hurt equally, but we must leave results in the past and work our way out of this situation.

"We are last in our group because that is what we deserve. The coach is always responsible for that.

"Back in September, most of my players were low on form following the World Cup, but this week during training I saw my players very lively and motivated. That's why I am very surprised about the result."

Ranieri has managed almost 1,000 career games and has a win percentage of close to 46 per cent. He replaced Fernando Santos who took Greece to the last 16 of the World Cup.

Seventy-five-year-old Italian Giovanni Trapattoni has already been linked with his job, having most recently been employed by the Republic of Ireland. 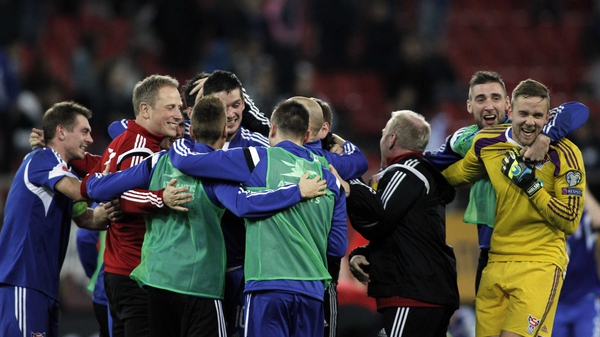