Faroe Islands recorded a shock 1-0 victory over Greece in Athens to leave Claudio Ranieri's side slumped at the bottom of Euro 2016 qualifying Group F.

Although the Faroe Islands had defeated fellow minnows Gibraltar 4-1 in March, a last competitive victory came against Estonia in June 2011 and they managed just one point from the 10 World Cup 2014 qualifying matches.

Lars Olsen's men, ranked 187, pulled off arguably the biggest result in the association's short history - having joined FIFA officially in July 1988 - with a goal from veteran forward Joan Simun Edmundsson, who had a spell at Newcastle and Gateshead, on 61 minutes.

The embarrassing defeat for Greece, who won the European Championships a decade ago and had performed well at the World Cup in Brazil, will leave more question marks over the future of Italian Ranieri, who was already under fire after losing at home to Northern Ireland.

The loss against the minnows came on the back of the news the Hellenic Federation on Friday suspended all professional football after an alleged off-the-field attack on a referee.

Romania replaced Northern Ireland at the top of Group F following a 2-0 win over Michael O'Neill's men in Bucharest with a second-half brace from Paul Papp.

Hungary are third, two points behind Northern Ireland, after they beat Finland 1-0 in Budapest with a late goal from Zoltan Gera, the former West Brom and Fulham midfielder. 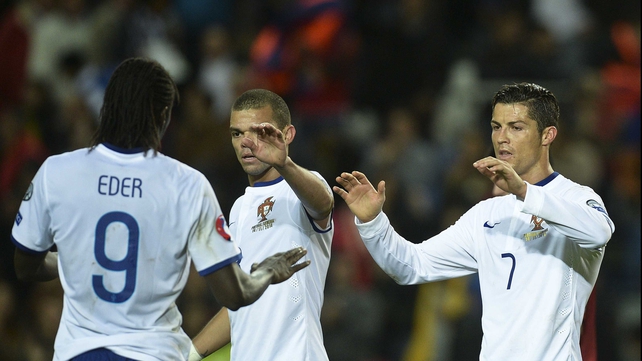 The Real Madrid forward took his tally in qualifying and tournament matches to 23, passing Dane Jon Dahl Tomasson's total with a close-range finish on 71 minutes.

The victory sees Fernando Santos's side get their qualification campaign back on track to move a point behind Denmark, who came from behind to win 3-1 in Serbia, but have played one match more.

Serbia made a flying start through Zoran Tosic after only four minutes, but Nicklas Bendtner (61) equalised in the second half, with Simon Kjaer (63) quickly adding a second.

Wolfsburg forward Bendtner, who left Arsenal in the summer, added a third with five minutes left.