Tottenham continued their march towards the Europa League knock-out stages with victory in Greece, yet their shocking second-half display against Asteras Tripolis will be of major concern to Mauricio Pochettino.

It was nowhere near as straightforward as it should have been, though, with Asteras deserving much more than Jeronimo Barrales' late consolation goal and a 2-1 home defeat.

Few could have predicted such a flaky Spurs display after a dominant, if uninspiring, opening period in which Townsend opened the scoring from the spot.

The England winger provided a fine cross shortly afterwards for Kane to net his eighth in as many games, making a scoreline similar to the 5-1 thumping in the reverse fixture two weeks ago look possible.

However Asteras, playing in what manager Staikos Vergetis called the biggest match in their history, dominated the second half from the outset, with Tasos Tsokanis coming close seconds after the restart.

That effort was reminiscent of Sammy Ameobi's game-changing goal for Newcastle at White Hart Lane last month and, yet again, Spurs failed to adequately respond.

Asteras attacked with renewed vigour and Facundo Parra twice wriggled free only to miss gilt-edged chances, before Pablo Mazza crashed a strike off the post.

The central defensive pairing of Jan Vertonghen and Federico Fazio looked rattled, with the latter receiving the second red card of his short Spurs career in stoppage time. Barrales scored the resulting penalty but Asteras could not quite squeeze a leveller, as Spurs rode their luck.

Pochettino rested the likes of Younes Kaboul, Kyle Naughton and - for the sixth successive European trip - Emmanuel Adebayor for this match, making nine alterations against a side who were playing in the fourth tier of Greek football just 10 years ago.

Vertonghen and Christian Eriksen were the only survivors from the side which started Sunday's 2-1 comeback win at Aston Villa - an unconvincing victory they looked to build on in Tripoli.

Spurs started brightly but struggled to create clear-cut chances, with a hopeful, long-range effort from captain Vertonghen and a tame Erik Lamela strike they best they could muster despite dominating possession.

Asteras had less of the ball but were still creating chances, with Eric Dier recovering well to deny Mazza before Giorgos Zisopoulos put wide from the resulting corner.

Mazza missed poorly as Asteras continued their hunt for a shock lead - chances they were made to rue in the 36th minute.

Khalifa Sankare's challenge on Townsend was strong but the defender appeared to get the ball. Referee Javier Estrada felt it was reckless, though, handing out a booking and awarding a spot-kick which the England winger impressively powered into the top right-hand corner.

Scorer turned provider just six minutes later. Having switched to the left flank, Townsend sent a fine cross to the back post where Kane showed impressive strength to head home.

A third looked set to arrive in first-half stoppage time, only for Kane to hit the crossbar from close-range and Townsend's follow-up to also strike the woodwork - although their blushes were spared by the offside flag.

It was a confident end to the half, making Spurs' capitulation after the break all the more frustrating.

Pochettino criticised his players for their lack of mental strength after Ameobi scored for Newcastle recently - something he may well bemoan again after Tsokanis came close shortly after the restart.

Martin Rolle was also allowed a shot before Spurs temporarily settled, with Eriksen and Townsend having efforts from distance.

The visitors continued to look susceptible defensively, though, and Parra should have scored when he cut past Fazio following a Vertonghen slip.

The striker had another gilt-edged chance moments later, but this time he blazed over after cutting past Fazio in a similar position.

It was shocking defending and seemed to gee on the hosts as they attacked with renewed enthusiasm, with Mazza soon firing a wonderful half-volley which came back off the post.

Fernando Usero had a penalty appeal rejected before Vorm pulled off saves to deny Zisopoulos and lively substitute Ziguy Badibanga as the clock wound down.

It had looked like that would be enough, only for Fazio to get a straight red card for a late foul on Barrales. The substitute scored the resulting spot-kick, setting up a grandstand finish which did not arrive as Asteras lost a European home match for the first time. 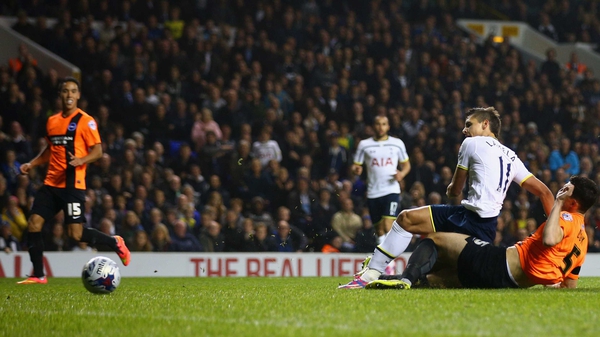