Real Madrid coach Carlo Ancelotti insists Cristiano Ronaldo is fully focused on the team's requirements and not writing his name into the Champions League history books.

The Portugal international is one goal away from equalling the great Raul's tally of 71 in Europe's elite competition.

If tonight's opponents Liverpool display any of the defensive vulnerability they have shown this season, there is every chance the 29-year-old - who scored at Anfield in the meeting a fortnight ago - could surpass that feat at the Bernabeu.

Even the return of fellow forward Gareth Bale after a five-match injury absence is unlikely to take any of the spotlight away from Ronaldo, but Ancelotti is not concerned by talk of landmark moments.

"Cristiano is working hard for himself and the side, just like other players," said the coach of the defending champions.

"I don't think he's thinking about the record, he has time - it's not his last game. He is focused on playing for the team."

Bale's comeback gives Liverpool, who were comfortably beaten by three first-half goals at Anfield, an even greater headache.

"Gareth Bale is ready to play and is back from injury. I don't know if he will play from the off or on the bench," Ancelotti added.

"Gareth Bale is ready to play and is back from injury. I don't know if he will play from the off"

While Real have no problems up front - they won 4-0 against Granada at the weekend to take their tally to 37 in 10 matches in the Primera Division - the Reds have been woefully lacking in the injury-enforced absence of last season's second-highest scorer Daniel Sturridge.

Having lost to Newcastle, scraped past Swansea and been held to a goalless draw at home to Hull in the last week, the last place you would want to take your team is Madrid.

But Liverpool boss Brendan Rodgers stressed there would be no conceding this game - even though the reality remains that the Reds' Group B future will be decided by the final two matches against Basel and Bulgarian minnows Ludogorets.

"We are certainly not coming here as a team expected to lose and then look at the other games as games to qualify," the Northern Irishman said.

"For us, we see it as an opportunity. We still very much have qualification in our hands. 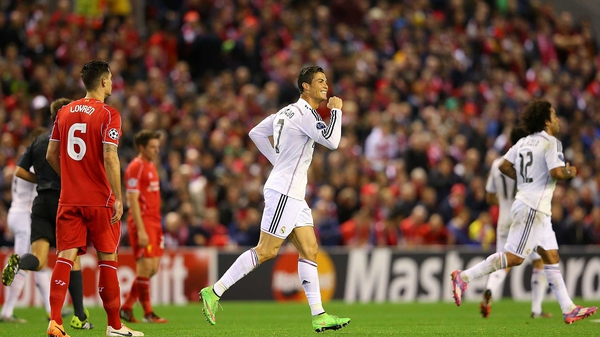 Brendan Rodgers: Liverpool can get a result in Madrid