Kenny Cunningham has said he fears for Manchester United as they face a daunting run of the fixtures in the Premier League following last night’s 2-2 draw with West Bromwich Albion.

United recovered from going behind twice to rescue a point from The Hawthorns.

But they now trail leaders Chelsea by 10 points in the table.

Jose Mourinho’s side visit Old Trafford this Sunday and a derby with Manchester City follows a week later.

Asked whether things are likely to get worse before they get better, the RTÉ Soccer analyst said the indications are that United will struggle to match the leaders.

The former Ireland captain told RTÉ Sport: “Performance levels will have to improve dramatically to cope with the power and quality of those sides.

“It will be a barometer in terms of how far they have come under Van Gaal in how they can perform against Chelsea who are so consistent and such a very good technical and physically powerful side. It will be a real test for them at this moment in time.

“I think they are some way short. The players will really have to lift themselves. Van Gaal will have to get his team spot on.

“He has fluctuated a lot in the past couple of weeks and needs to get it settled in formation and to a certain extent to a settled group of players. They are still struggling at the moment to find that top gear.”

Van Gaal hailed the display against West Brom as the best in his time at the club and rued some mistakes that led to the concession of two goals.

Cunningham said he would be concerned about that assessment of such a performance from the United boss.

“It's a little bit depressing, I think, for Manchester United fans if Van Gaal is waxing lyrical about the performance in terms of it being the best of the season.

“There was one or two encouraging points particularly in the second half when he made a couple of substitutions, which gave them a little bit of impetus and they pushed on. But West Bromwich Albion were very much in this game.

“They may only have had two shots at the Manchester United goal but they controlled game for certain chunks and carried a real threat and certainly in the first half it was a rather disjointed Manchester United performance.

“As par for the course this season, there was one or two encouraging signs, one or two decent individual performances, but collectively as a group I wouldn't be shouting from the roof tops about that performance.

“I'd be a little bit worried if I was a Manchester United supporter at the prospect of a vibrant and powerful Chelsea team coming to Old Trafford at the weekend.” 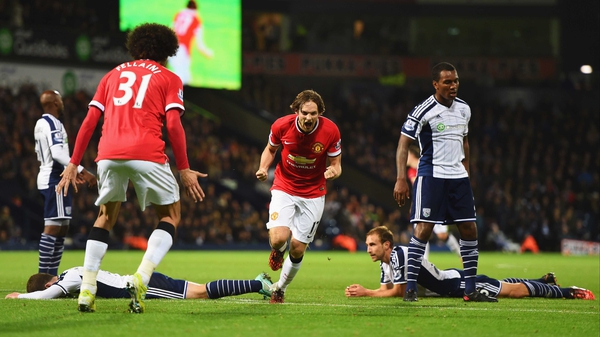