UCD’s Premier Division survival hopes received a massive boost after an impressive victory over the Derry City, in terrible conditions at the Brandywell.

Mark Langtry’s first-half wonder strike was enough for Aaron Callaghan’s side to secure their first victory since way back in July.

City went close early on but Patrick McEleney blasted over from six-yards after Stephen Dooley’s inch perfect cross picked the midfielder out.

UCD had goalkeeper Conor O’Donnell to thank on 15 minutes as he dived well to keep out Mark Timlin’s stinging effort from the left hand side of the box.

A super counter attack on 30 minutes by the home side ended with Rory Patterson’s pass releasing Philip Lowry, but the Limavady man saw his drive from the edge of the box whistle wide.

The deadlock was broken moments later against the run of play as UCD took the lead thanks to Mark Langtry’s tremendous long range strike which flew past a diving Gerard Doherty.

O’Donnell came to the rescue again for the Students right on the stroke of half-time when he somehow kept out Sean Houston’s close range header, after the substitute got free inside the UCD six yard box.

Derry continued to probe but lacked a cutting edge. A long range strike from Patrick McEleney on 54 minutes, which skipped off the wet surface was easily gathered by O’Donnell.

More good play by McEleney ended with his pass finding Houston, but with only O’Donnell to beat, his close range shot, which had the keeper beaten, was cleared off the line by Hugh Douglas.

In the closing stages Houston again went close but his teasing, curling effort from 15 yards, which had O’Donnell beaten, whistled just wide.

UCD should have wrapped the points up in stoppage time when Robbie Benson won possession on the half-way line, but after racing clear and with only Doherty to beat, the skipper was denied by a super save by the City net-minder. 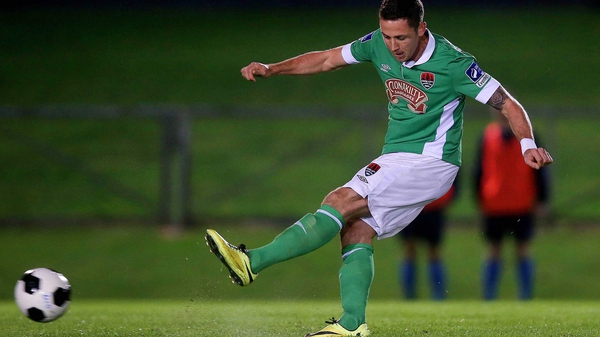 Cork rout UCD to keep pressure on at the top