Dundalk recovered from their Europa League defeat to Hajduk Split by moving back to the summit of the SSE Airtricity League table with a 2-0 win over Athlone Town.

Kenny resisted the urge to tinker with his team with Kurtis Byrne for John Mountney the only change from the side that was beaten by Hajduk Split in the Europa League on Thursday night.

Kurtis Byrne was instrumental in Dundalk’s first-half play and he saw an effort knocked off the line by Declan Brennan early on.

Athlone Town goalkeeper Ryan Coulter then made a fantastic save to tip Byrne's rasping volley around the post. Referee Derek Tomney did the goalkeeper a disservice, awarding a goal kick.

The openings continued to appear and Byrne was involved again in the 20th minute, sending Dane Massey careering away on the left. The left-back’s darting run took him into the box but his inch perfect cut back was blazed over the top from 12-yards by Richie Towell.

The pressure eventually told two minutes later. A well worked move ended with Darren Meenan and Hoban setting up Byrne for another pop at goal. Coulter again denied the Byrne but Hoban was on hand to sweep home the rebound.

Goal number two arrived nine minutes later. Towell floated in a free-kick from the left and Brian Gartland rose highest to leave Coulter with no chance with his seventh of the season.

Athlone were almost back in the game after 35 minutes when John Mulroy’s 25-yard drive had Peter Cherrie scurrying to his right. Unfortunately for Mulroy, the shot lacked direction and it went wide.

Gartland thought he had made it 3-0 when he powered home from a Meenan free-kick in the 41st minute but Tomney ruled the goal out after a questionable flag from the assistant.

The second-half proved to be a dull affair as Dundalk, with one eye on Thursday's return leg in Croatia, took their foot off the accelerator.

James O'Brien should have pulled one back for the visitors just past the hour but his lob drifted just over the top from 18-yards.

The hosts were given another wake up call seconds later when John Mulroy found himself in plenty of space to size up a shot at goal but his effort curled the wrong side of Cherrie's upright.

Athlone continued to have a go and the flat-footed Cherrie was relieved to see a deflected shot from substitute Ian Sweeney whistle past the upright with 10 minutes to go. 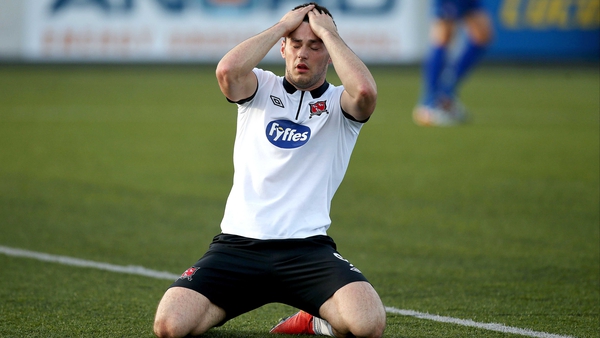