The Republic of Ireland Women’s Under 19 team go into Monday’s night game with Sweden knowing that a result will secure a place in the UEFA European Championship semi-finals.

After becoming the first Irish team to qualify for this tournament and follow it up with back-to-back wins over Spain and England.

However, Dave Connell has kept the players grounded and focused on their final Group B game. A single point would be enough to send them into the knock-out stages, but they want all three.

According to midfielder Roma McLaughlin, the atmosphere in the camp in Oslo, Norway, has been upbeat but disciplined as they are taking nothing for granted despite their impressive start.

“We’re taking it each game as it comes and we’re looking forward to the Sweden game because we know that we have to be fully focused and go in to win it,” said McLaughlin.

“We need a win or a draw to qualify, but we’re going in with a winning mentality as we want to finish the group with nine points. We’ve started well in the two games but it’s all about Sweden now.”

Still only 16 years old, McLaughlin is the youngest player in this year’s tournament but big occasions don’t faze her one bit and she has the footballing talent to back up her self-belief.

The Donegal native is part of a group who rely on teamwork and organisation to win games, which is why Connell insists that they have already forgotten about last week’s wins and are looking ahead to Sweden.

“It’s been an unbelievable start to the tournament by the girls, but we knew what they were capable of and they showed it in qualifying. We came in as the lowest-ranked team but we’ve beaten the top two seeds in Spain and England,” said Connell.

“Although, nothing is guaranteed yet and the girls know that. Sweden are a tough team and we’ll have to be on top of our game to beat them. We’ve been working hard for that and the girls will be ready for it.”

In team news, Clare Shine has recovered well from a neck injury and should be fit to face Sweden, while Connell has plenty of options to choose from with a full squad itching to feature. 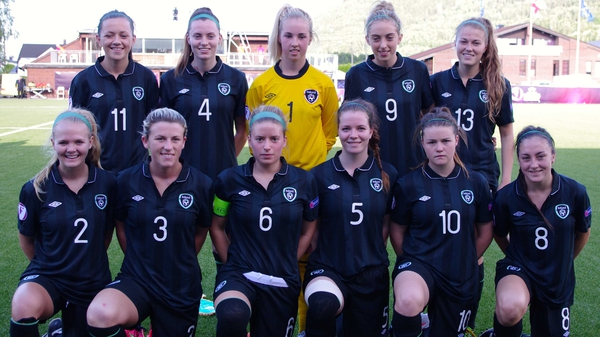