Cork City moved top of the SSE Airtricity League Premier Division with a hard-fought 2-1 victory over UCD at Turner’s Cross.

The visitors took a surprise lead just six minutes into the contest when Robbie Creevy finished superbly to silence the expectant home fans.

City responded with a huge sense of urgency though, and had a first-half penalty from Billy Dennehy and yet another header from Mark O’Sullivan to thank for three more league points.

John Caulfield made two changes to the side that claimed a late win over Drogheda United. Dan Murray returned from suspension to replace the injured Gavin Kavanagh, while Liam Kearney came in for suspended captain John Dunleavy. One of City’s best attacking threats, Billy Dennehy, slotted in at left-back alongside his brother Darren.

Students’ boss Aaron Callaghan was happy with his team’s effort against Sligo Rovers and named the same starting XI for the trip.

His faith was quickly repaid as captain Robert Benson raced clear down the right sideline to feed Samir Belhout on the edge of the area, and Creevy was perfectly placed to fire home his colleague’s neat pass.

The goal stunned the 2,616-strong home crowd who hadn’t seen their team concede a goal in 685 minutes, and Dan Murray blazed wide from close range two minutes later as the hosts quickly went about trying to claim an equaliser.

Mark O’Sullivan forced UCD keeper Conor O’Donnell into a fingertip save with 16 minutes on the clock, with Billy Dennehy’s cross inside from the left stretching the UCD defence out completely.

Colin Healy and Garry Buckley were next to try their hand at a goal, the Ballincollig man blasting a long-range shot just over the crossbar two minutes later before his younger team-mate drew another save from O’Donnell on 22 minutes.

Creevy was a danger once again shortly before the half-hour mark when his header forced Mark McNulty into an excellent save as the City goalkeeper illustrated just why the Leesiders have kept so many clean sheets during their campaign to date.

City continued to pile forward in numbers, pulling their opponents - who were defending en masse - all over the park.

The breakthrough eventually came, however, when O’Sullivan beat Hugh Douglas with a strong run down the left and the UCD defender hauled the striker to the floor.

Referee James McKell pointed to the spot and it was up to Billy Dennehy to bury the penalty, sending O’Donnell the wrong way and getting Caulfield’s men back on level terms.

Despite the introduction of John O’Flynn after the break, the second half took some time to catch fire, with few clear cut chances for either team.

Josh O’Shea tested O’Donnell on 50 minutes and was followed subsequently by Rob Lehane and then O’Flynn as the men in green desperately sought their second of the night.

When it eventually came, the goal was simplicity itself, O’Sullivan heading home superbly from Healy’s corner and leaving the outstanding O’Donnell with no chance of keeping City’s latest attack out.

O’Flynn might have made the result a little clearer when he slid in to try and poke Lenihan’s cross home with ten remaining and then saw Gareth Matthews block a second effort three minutes later.

The striker found himself clear in on goal with just O’Donnell to beat a minute later again, but the UCD keeper scooped the ball away from City’s number nine, who had the goal at his mercy. The former Exeter City star was blocked once more by O’Donnell as the game ticked into added time, but showed enough to suggest that City will be even stronger up front for the reminder of the season. 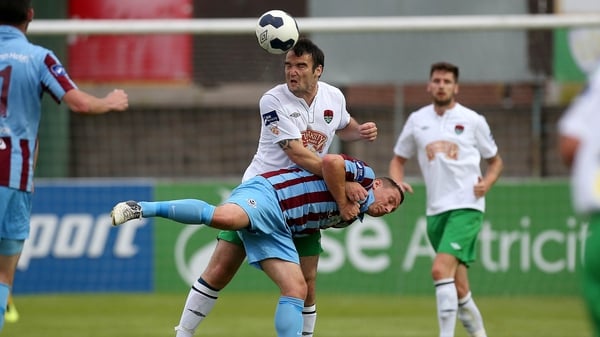