Shamrock Rovers made light work of a struggling UCD as they cruised to a facile 2-0 success in their SSE Airtricity League Premier Division encounter at Belfield.

The Hoops struggled after the break to add to their tally with Ciaran Kilduff and Eamon Zayed’s misses proving irrelevant against a UCD outfit lacking confidence.

The hosts should have opened the scoring in the fourth minute but Hugh Douglas placed his header far too close to Barry Murphy following Chris Mulhall’s inswinging free-kick.

From the resultant clearance Sean O’Connor fell to ground inside the UCD penalty area but his optimistic claims for a spot-kick were correctly dismissed by referee Paul Tuite.

The refreshingly open encounter continued to entertain with Gary McCabe driving narrowly wide in the sixth minute while soon after James Kavanagh produced a superb block to thwart Dean Kelly in the act of shooting.

The Hoops maintained their control of affairs although they failed to gain tangible reward for their supremacy with O’Connor heading over from a McCabe cross in the 13th minute while Kelly curled a free-kick narrowly wide four minutes later.

Rovers’ patient build up play eventually gained its reward in the 27th minute as a through ball from Zayed found the overlapping Madden, whose cut-back was despatched confidently to the net from eight yards by Finn.

The procession towards the home goal continued unabated with McCabe getting in the way of Kelly as they climbed to reach O’Connor’s cross as the students struggled to deal with the precise passing of their opponents.

McCabe should have doubled his side’s advantage four minutes before the break but he shot wastefully wide after Kelly’s precise through ball.

Kelly’s next involvement was more fruitful however as he powered home a header in the 45th minute after another superb cross from the influential Madden as the visitors enjoyed a well-merited 2-0 interval advantage.

There was little to commend the early stages of the second half with both sides ceding possession all too regularly, although Madden did make another couple of enterprising sorties as the Hoops looked to cement their advantage.

From once such break in the 58th minute, Finn lacked the accuracy of his earlier strike, blazing high over the crossbar from the edge of the area after Madden had once again escaped the attentions of Gareth Matthews.

At the opposite end, chances were at a premium but Samir Belhout wriggled free to test the reflexes of Murphy who dealt comfortably with his near post strike in the 64th minute.

The match meandered from that juncture with Kelly almost adding another goal in the 72nd minute as he latched onto Karl Sheppard’s cross but his shot on the turn lacked sufficient power to worry Conor O’Donnell in the home goal.

O’Donnell’s was properly tested four minutes later as McCabe connected sweetly on the half-volley but the keeper dived full-length to beat the powerful effort away to safety.

In fitting with the poverty of the second-half, substitute Ciaran Kilduff wasted a brace of glorious chances at the death but those misses proved academic against a disappoint student outfit. 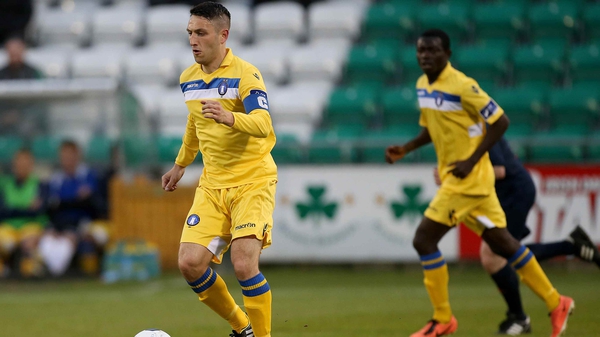