Bohemians missed a late, late penalty as they wasted the chance of a first home win of the season having come from 2-0 down at Dalymount Park and in the end had to settle for a 2-2 draw.

In a dramatic finish to the game, Athlone had substitute Neil Harney sent off for handball on 87 minutes. But Dinny Corcoran’s weak penalty was easily saved by Paul Skinner.

Trailing to a brace of goals from James O’Brien, Bohemians’ revival was sparked by introduction of Kevin Devaney on 52 minutes.

Two minutes later, Steven Beattie fed Devaney who went on a solo run past several defenders before shooting under Skinner.

It was all Bohemians thereafter and they duly levelled on 76 minutes.

Alan Byrne failed to cut out Devaney's cross in from the right and Corcoran pounced to sweep home the equaliser.

Athlone belied their lowly status, displaying the better composure in taking the game to their hosts, carving the first opening on 22 minutes. A flick from Philly Gorman found O’Brien whose first time volley brought a smart save from Dean Delany.

And O’Brien was there again to this time make no mistake and give Athlone a deserved lead on four minutes. Kealan Dillon and Barry Clancy carved Bohemians open to put O’Brien in to confidently slide the ball past Delany.

Bohemians responded and might have levelled within two minutes; Steven Beattie just failing to make contact with Keith Buckley’s low cross from the right. Corcoran was then not far wide with a fine drive from 25-yards five minutes before the interval.

In-between, though, it came within inches of being 2-0 when Clancy arrived in the box to blast over the top from Sean Byrne’s arcing cross from the left.

Bohemians were a shambles defensively as they conceded a dreadful second goal within two minutes of the restart.

Sean Brennan did well to outfox Jack Memery to put over a terrific which saw Gorman shoot against a post.
The danger remained though as the loose ball ran kindly for O’Brien who calmly sidefooted to the net despite Delany’s best efforts to keep the ball out. 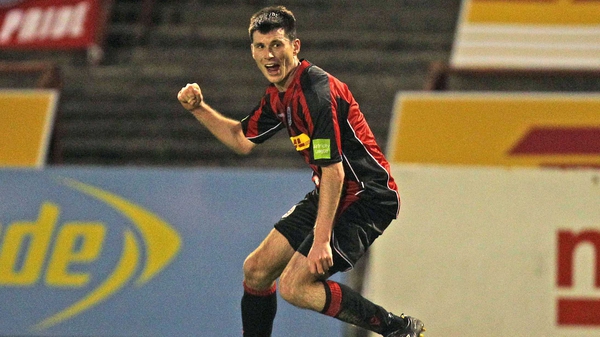