Sligo Rovers jumped ahead of Bray Wanderers in the SSE Airtricity League table on Saturday night with a 3-0 win over the Seagulls at the Showgrounds.

Paul O'Conor opened the scoring on 19 minutes with a poacher's finish, before John Russell's wonder strike on 56 and an Eric Odhiambo goal three minutes from time, added to a disappointing night in the northwest for the Seagulls.

The Bit o'Red were without a number of key players due to injury. Alan Keane (thigh and knee), Joseph Ndo (calf) and long term absentees Gavin Peers (knee) and Raffaele Cretaro (calf) all missed out.

Manager Ian Baraclough made one change to the side that claimed the club's maiden Setanta Sports Cup title last weekend, with Danny Ledwith taking the place of the injured Ndo.

Seagulls boss Alan Mathews was without Jake Kelly (ankle) and Shane O'Connor (hamstring). Adam Mitchell and Niall Cooney both served suspensions. Mathews made three changes to the side that beat Limerick last week with Danny O'Connor, Gary Curran and Adam Hanlon all returning.

The home side were attempting to leapfrog their Wicklow opponents in the league table in front of a crowd of 2,094 inside the Showgrounds.

Bray gave the reigning FAI Cup holders a few worrying moments as David Cassidy in particular, caused plenty of headaches in the Rovers defence during the opening stages.

But it was the home side who went close again on 11 minutes. Danny North latching on to the end of Aaron Greene's through ball, only to see his neat chip come off the top of the crossbar.

Former Sligo midfielder Gary Curran had Gary Rogers scrambling a minute later, but the former St Pat's goalkeeper did well to smother the Tubbercurry native's effort from distance. Both teams testing each other early on.

Rovers' Ledwith dragged two shots wide of McGuinness's goal on 16 and 18 respectively, while Shane O'Neill did likewise for Wanderers shortly after.

The home side grabbed the lead on 19 minutes. Bray failed to deal with a Russell cross before the ball landed to O'Conor at the edge of the six-yard box.

The Dubliner took full advantage and bundled the ball past the hapless McGuinness to put Rovers in front; his second goal in as many games.

Both Cassidy and Dean Zambra combined after 26 minutes to set up O'Neill, but the Bray winger was unable to get enough behind the ball to concern Rogers.

O'Neill's effort was to be the last of the half as both teams struggled to get good passing games together as the rain continued to pour,  Sligo leading at half-time.

Greene did well to skip by the challenge of Jamie McGlynn eight minutes into the second half, but couldn't direct his effort inside McGuinness's post.

The home side doubled their lead in the 56th minute in sensational fashion.

Situated at the edge of the area, O'Conor's cross from the left was headed away by a Bray defender only for the ball to fall to Russell who - in opening up his body - caught the ball first time to sweetly strike a sumptuous volley beyond McGuinness and into the top corner of the net.

The Galway man almost repeated the trick eight minutes later, only to see his cross-come-shot from wide right drift over McGuinness and onto the crossbar.

The Seagulls had to rely on some brave defending from McGlynn to block down North's first-time effort from close range after 77 minutes.

Odhiambo didn't miss the next chance on offer as, which arrived in the 87th minute. The former Hereford United midfielder got on to the end of a Sean Maguire pass and dummied McGuinness before finishing into an empty net. 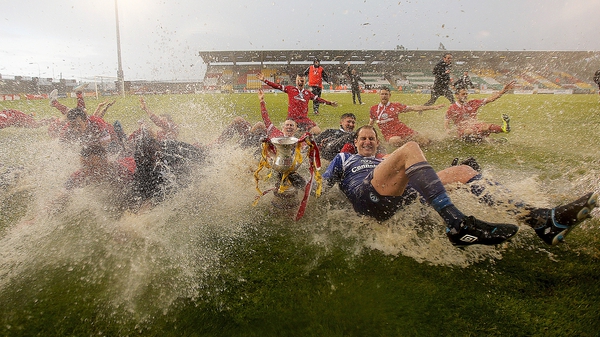