The returning Fabio Borini and Iago Aspas were among the scorers as Liverpool eased to a 4-0 win over Shamrock Rovers in their friendly at Lansdowne Road.

Ryan Brennan went closest for the Hoops when his header hit the inside of the post just before the break.

There may not have been a Premier League trophy to show off, but 42,517 turned out to see Liverpool play their second game at the Aviva Stadium in nine months.

With the Liverpool players on World Cup duty absent, Joe Allen and Lucas Leiva were the only regulars to start in a side made up of mainly fringe players and promising academy graduates.

There was also a return to the starting line-up for Borini after his loan spell at Sunderland.

Shamrock Rovers, who sit second in the SSE Airtricity Premier Division, went with one of their strongest line-ups.

There were just two changes from the side that won 1-0 at Derry City last weekend. Robert Cornwall replaced Conor Kenna at centre half, while Brennan slotted into a five-man midfield.

Liverpool were ahead inside the first ten minutes as lively winger Jordon Ibe squared the ball for Aspas to sidefoot home from close range.

The visiting side had several chances to extend their lead in a half they controlled. Rovers goalkeeper Barry Murphy kept out a couple of efforts from Aspas, as well as from left-back Brad Smith.

The Hoops spent much of the half working off the ball, but had opportunities to draw level.

Jones was beaten however by Brennan’s header towards the end of the half. Brennan could only look on as the ball struck the inside of the post and rolled across the goal.

The second goal arrived soon after the restart after Rovers substitute Karl Sheppard was caught in possession on the halfway line.

The ball was fed to Ibe, who in turn played Borini into space. The Italian’s low shot beat Murphy’s left hand and went in off the post.

Ibe should have put his name on the scoresheet as he missed two sitters in quick succession before the hour mark.

Rovers struggled to gain any momentum in the second half as boss Trevor Croly emptied the bench, using all nine substitutes, as he rested some players ahead of Saturday’s game against Athlone Town.

Kelly prodded in the third goal with 15 minutes left after Aspas’s shot deflected into his path at the back post.

Rovers substitute goalkeeper Craig Hyland denied Ibe the goal his performance deserved when he stopped a fierce shot with his head. 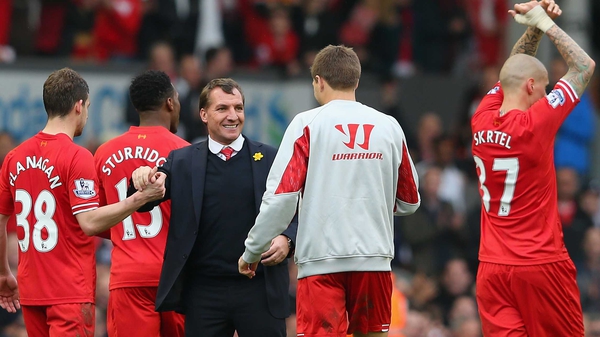