Bohemians’ wait for a first league win of the season at Dalymount Park continues as they had a man sent off for the second week running and drew 0-0 with UCD.

Despite playing for an hour ten men, Bohemians were much the better side throughout,  but still needed a brilliant save from Dean Delany and then one of his posts to earn a fourth home draw.

If not quite the lightning start they enjoyed against Derry last week, Bohemians did begin brightly, though Jason Byrne might have done better than shoot tamely at Conor O’Donnell after Kevin Devaney had robbed James Kavanagh to set up the chance on 12 minutes.

Byrne was visibly annoyed with himself seven minutes later when shooting into the side netting from Paddy Kavanagh’s pullback.
But the main talking point of the first half arrived on 31 minutes.

Bohemians’ central defender Roberto Lopes was harshly shown a straight red card for what didn’t look a foul on Robbie Benson as the UCD skipper ran through onto Chris Mulhall’s ball over the top.

Three minutes later a terrific one-handed save by Delany kept out a Hugh Douglas header from Mulhall’s corner to prevent UCD going in front.

At the other end, O’Donnell almost gifted Bohemians a 43rd minute lead when misjudging the flight of a Karl Moore corner.

Relief came for the UCD keeper when seeing Dave Mulcahy power his free header over the bar.

Despite their numerical disadvantage Bohemians continued to take the game to UCD.

But it was College who came within inches of taking the lead from a 67th minute counterattack. Benson played a delightful one-two with Robbie Creevy before seeing his left-foot shot from distance come back off a post.

Bohemians pressed until the end, though, with substitute Walsh twice bringing saves from O’Donnell.

Byrne might have won it three minutes into stoppage time but shot straight at O’Connell from Walsh’s cross. 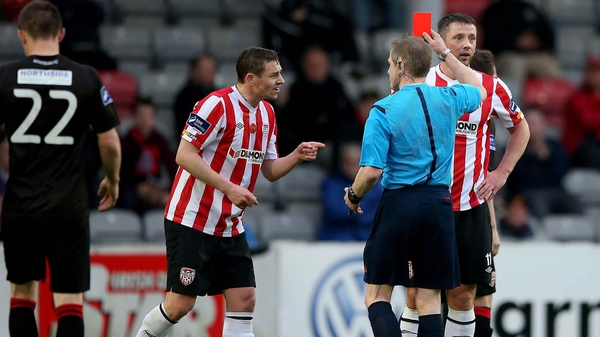