It’s second against third in Richmond Park tonight as the Saints host the Rebels with both sides looking for a victory to leave them at the top of the SSE Airtricity League.

With current league leaders Dundalk in action in the Setanta Sports Cup final against Sligo Rovers this weekend, both sides have the chance to be go top after this weekend’s league fixtures.

Ahead of Friday’s clash, Saints’ manager Liam Buckley confirmed that Derek Foran (knee) and Mark Quigley are both injured and unavailable for the game.

In better news for the Saints, Ken Oman has returned to training following a spell on the sidelines.

Buckley is expecting a testing encounter and said: "We know it’ll be tough as John Caulfield has his side performing well.

"Ever since the first game of the season when we came away from Turner's Cross with a 1-1 draw, Cork City have been very impressive. They have added a number of quality players during the off-season and we're well aware that tonight's match will be up there with the sternest of tests."

Cork's last league fixture saw them suffer their first defeat of the season at the hands of Dundalk, but manager John Caulfield is keen to put an immediate end to that slide.

"We had a bad performance in Dundalk, we all know that, and I expect on Friday that we will go back to basics; work hard, do what we have been doing well and we are all looking forward to it," he said.

"We’ve shown since the start of the season that, when we are on our game, we are as good as anyone."

Caulfield will be without Darren Murphy, who remains sidelined with a hamstring injury, however Darren Dennehy returns having served the second game of a two match suspension.

Danny Morrissey has returned to non-contact training, but remains a number of weeks away from a return to availability. Michael Rafter is still sidelined, with the City boss saying the striker is likely to be unavailable until late on in the season.

Bohemian manager Owen Heary has warned his side not to let their recent high standards drop as his predecessor Aaron Callaghan takes his place in the opposition dugout at Dalymount Park for the first time since parting company with the Gypsies in July of last year.

Bohs are unbeaten in three games in all competitions and Heary said: "We've turned good performances into decent results. We've drawn away to Cork, drawn against Derry and pushed on to get the win against St Pat's in the EA Cup. The challenge now is to push on further and get that first win at home in the league, which is long overdue.

"After good results against strong teams, fans can sometimes think 'ah it's only UCD'. It's important that the players don't think that way. UCD have very good players - some of the best young players in the league, so you can never write them off. We can't let our standards slip."

Bohs will be without Dinny Corcoran who starts a three-match ban while Aidan Price remains out with a quad injury.

Paddy Kavanagh is still struggling with an ankle knock but Anto Murphy made his first appearance of the season as he was introduced from the bench on Tuesday after a lengthy lay-off with a hamstring injury.

Callaghan brings his UCD side to Dalymount in search of three points.  Despite picking up 11 points in the first round of games, UCD find themselves in 11th in the league, however with only two points separating 11th and sixth position, the UCD boss is chasing a win to propel his side up the table.

"In recent weeks I have been saying how we have been performing extremely well even though we weren’t picking up the results we quite deserved," he said.

"However in the last two games against Derry and Drogheda we have started to get those results, and I still believe that if we keep playing the way we are playing we will continue picking up some good results over the coming weeks and that starts with Bohemians on Friday.”

Ayman Ben Mohamed will remain out for UCD as he continues his recovery from a knee injury, while Dean Clarke will also be out with a back injury and is likely to remain out until after the mid-season break.

Bray enter their 900th match in the League of Ireland against Limerick looking to push themselves into the top half of the table.

But manager Alan Mathews knows his side will face a tough challenge from the visitors at the Carlisle Grounds – having battled to a 0-0 draw in Limerick in the opening league match of the season.

Mathews was disappointed with Bray’s defeat to Dundalk in the EA Sports Cup last Monday, but took comfort from the return to fitness of several key players from injury.

He said: “It was very pleasing to be able to give some valuable game time to a number of players coming back from injury on Monday afternoon in the EA Sports Cup against Dundalk.”

Club captain Danny O’Connor, Shane Byrne, Adam Hanlon and Eric McGill have all recovered from injury and are included in the squad – but Bray will still be missing Shane O’Connor and Jake Kelly through injury, while Rob Maloney serves a one-match ban for his sending off in last Friday’s goalless draw with Athlone.

Limerick are without the suspended trio of goalkeeper Barry Ryan (automatic), left-back Robbie Williams and striker Rory Gaffney (both four yellow cards), but Scottish winger Danny Galbraith could be in line for his first start since September.

Roddy Collins' charges have drawn all of their last four league games but a 1-0 win over Sligo in the EA Sports Cup on Monday has the manager believing his side can build on that victory.

"It gave me a great lift - not the result but the performance. The way we kept the ball, passed the ball, it's the way I want to do it and the way we will do it," he said.

The Derry boss is hoping that Patrick McEleney will be passed fit, with the forward hoping to shake off a knee injury while Rory Patterson is suspended. Barry Molloy is back in the reckoning however, having recovered from injury.

With league leaders Dundalk in Setanta Cup action, Rovers have a chance to overtake Stephen Kenny's side with a win and manager Trevor Croly is eager to press his side's title credentials.

"We did well in the first series, and now we want to kick on and do even better in the next round. We start with a difficult test as we travel to the Brandywell to take on Derry City," he said.

"However, it is certainly a game that we are targeting three points from and we know we will have to put in a very good performance and show great character to achieve that, but we have done that numerous times this year,"

Croly must plan for the trip to the Brandywell without Eamon Zayed who remains out through injury, while Ronan Finn is a doubt and will be assessed before the game. 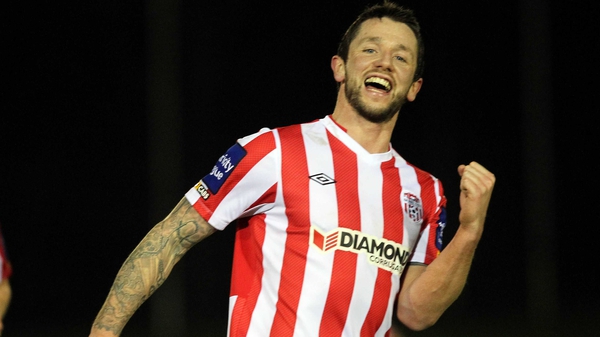