Sam Allardyce emerged triumphant from what has been called the P45 derby, with West Ham securing an unprecedented third win over Tottenham in a single season to ensure survival and heap further pressure on counterpart Tim Sherwood following this 2-0 defeat.

Their form heading into the match could not have been any different - the hosts failed to win in April, while Spurs were unbeaten - yet the clubs share similar stories when it comes to managerial uncertainty.

Sherwood's impressive win ratio has not been enough to stop speculation on his future that will no doubt intensify after West Ham ended a four-match losing streak with a 2-0 win in their final home match of what Allardyce acknowledged has been a "testing campaign".

The fans made their frustration known during last weekend's defeat at West Brom with anti-Allardyce chants and banners, although those same supporters will have no doubt left the Boleyn Ground in a better mood after beating Spurs for a third time this campaign.

An even, entertaining opening was blown apart midway through the first half by Younes Kaboul's red card, which was followed minutes later by Harry Kane accidentally nodding Andy Carroll's header past his own goalkeeper.

The east Londoners doubled that lead just before the break after Paulinho and Emmanuel Adebayor left an embarrassingly large gap in the wall, which Stewart Downing's free-kick duly exploited to ripple the back of the net.

Only the inspired form of France goalkeeper Hugo Lloris prevented West Ham from adding more in the second half, with the poor displays of those ahead of him meaning there would be no respite at the end of a difficult week for Sherwood.

His side began well enough at the Boleyn Ground, with Kane close to an opening goal after 52 seconds when West Ham goalkeeper Adrian's rushed clearance ricocheted off him and spun wide.

Adebayor was unable to cap a wonderful, flowing team move by striking tamely at Adrian soon after, before Carroll saw appeals for handball against Kane fall on deaf ears.

Michael Dawson appeared to then handle from the resulting corner, from which the ball broke to Guy Demel and his looping strike came off the crossbar.

Adrian saved a Paulinho header on goal and Downing blazed over as play swung from end-to-end, until the dimensions changed in West Ham's favour in the 25th minute.

A wicked deflection saw the ball looped over Spurs backline into the path of Downing, who, having left Danny Rose in his wake, continued on goal until being bundled over by a brainless challenge by Kaboul.

Referee Phil Dowd deemed him to be the last man and showed a straight red card, with Lloris having to be at his best to stop Carroll venomously firing home the free-kick that followed.

The ball went out for a corner and when Mark Noble swung it across, West Ham ended their 257-minute wait for a goal, with Carroll's header going in via an unfortunate deflection off Kane.

It was a horrible moment for the 20-year-old forward, who was replaced moments later by defender Vlad Chiriches in a bid to stem West Ham's increasing momentum.

George McCartney came close to netting at the backpost before Rose almost put into his own goal, with Lloris then doing exceptionally to turn Matt Taylor's goalbound strike around the post.

The France goalkeeper could only do so much, though, and his team-mates let him down as West Ham doubled their advantage a minute before the break.

Downing hit a reasonable free-kick that would have hit the wall had Adebayor and Paulinho not parted, allowing the ball to sneak through past the Spurs goalkeeper.

It was a shocking goal which was almost added to by a Carroll volley in first-half stoppage time.

West Ham continued strongly after the restart as Mo Diame's overhead kick produced an exquisite save from Lloris, who did well to stop Kevin Nolan scoring the follow-up before Taylor curled just wide.

The Spurs goalkeeper's one-man stand continued as Carroll flicked the ball on to Nolan, with the onrushing goalkeeper spreading himself to block behind.

Adrian fumbled a Christian Eriksen cross in a rare threatening moment for Lloris' counterpart, with Sherwood bringing on Sandro and Roberto Soldado in a bid to change the dynamics of the match.

The latter quickly had an impact, receiving a booking after kicking Diame and manhandling Nolan before striking across the face of goal.

Sandro was also at the heart of things in the closing stages, blocking a shot, picking up a booking and then seeing appeals for a handball against Taylor ignored.

Adrian did wonderfully to tip over a late Rose strike, which saw West Ham end a 10-match wait for a clean sheet. 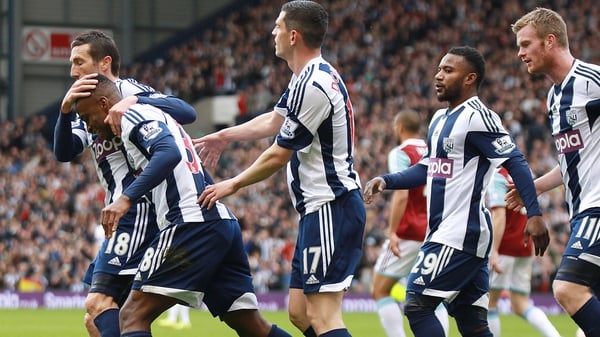