Gary Burke handed the students the lead in the 23rd minute with a precise finish from Robbie Creevy’s pass but Patrick Hoban glanced an excellent header two minutes before the break to restore parity.

It was one-way traffic from that point with second-half goals by Stephen O’Donnell, an own goal by Mark Langtry and Hoban four minutes from time.

The visitors looked in fine fettle from the opening whistle with Daryl Horgan receiving a generous amount of possession on the Dundalk left flank.

However, it was the Students who should have opened the scoring in the eighth minute as Cillian Morrison cleverly pulled the ball into the path of Chris Mulhall, who fired wastefully over the crossbar from ten yards.

The game meandered to a certain degree from that point with Dundalk controlling possession without appearing particularly threatening as UCD dealt comfortably with their initial promptings.

It took Dundalk until the 19th minute to finally test Conor O’Donnell in the home goal but Kurtis Byrne’s free-kick from 25 yards had insufficient power to trouble the goalkeeper.

As UCD settled into the contest, they began to show greater cohesion and a wonderful through ball from Robbie Creevy midway through the half was capitalised on by Gary Burke, who fired a clinical finish beyond Peter Cherrie from 14 yards. 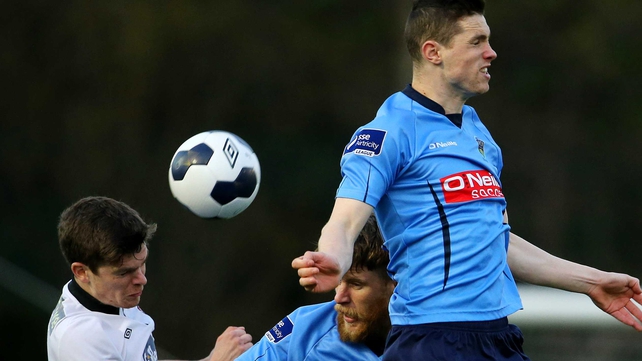 Dundalk’s struggles continued as the half progressed with Patrick Hoban showing a lack of composure after rounding O’Donnell, placing an aimless attempt across goal that Hugh Douglas cleared comfortably.

Gradually, the pressure was increased on the home goal with Towell’s speculative effort from Stephen O’Donnell’s cross arrowed too close to Conor O’Donnell in the 34th minute.

With UCD retreating even further, the visitors took full advantage in the 43rd minute with Tomas Boyle initially clearing from Kurtis Byrne but Patrick Hoban was on hand to steer a precise header across O’Donnell from Horgan’s subsequent cross.

Suitably encouraged, Dundalk drove forward with increasing confidence upon the restart with only a superb last-ditch tackle from Boyle denying Hoban his second of the evening in the 47th minute.

UCD’s policy of containment never looked likely to endure and they fell behind in the 57th minute as Hoban diverted Sean Gannon’s lengthy delivery into the path of O’Donnell who swept past his namesake from twelve yards.

Matters deteriorated for the hosts within two minutes as a Hoban cross caused consternation in the home defence with Douglas rashly clearing off Langtry for Dundalk’s third of the night.

The visitors looked to add to their tally as they dominated proceedings and only a superb save by O’Donnell denied Hoban in the 70th minute.

The centre-forward was proving unstoppable at this juncture and after Towell had struck the crossbar with an impudent attempt in the 75th minute, Douglas received his marching orders when hauling down Hoban on the edge of the area.

The victory was complete four minutes from time with fittingly Hoban finding the net emphatically from David McMillan’s centre, ensuring top spot in the table for the County Louth outfit. 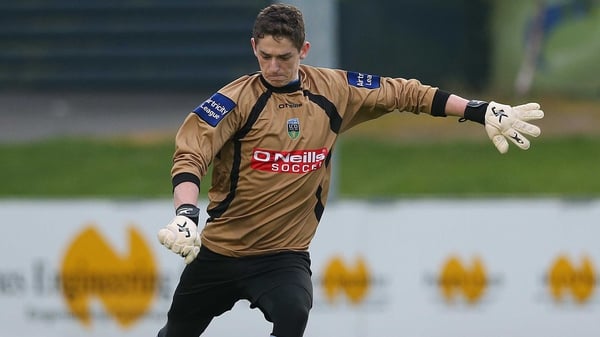