Everton boosted their Champions League qualification hopes with a 3-1 victory at Craven Cottage to leave strugglers Fulham rooted to the bottom of the Premier League table.

Having seen Fulham dominate the first 45 minutes, the Champions League-chasing Toffees responded with strikes from substitutes Kevin Mirallas and Steven Naismith and an own goal by David Stockdale.

It was Stockdale's unfortunate 50th-minute error that enabled Roberto Martinez's men to open the scoring, and although Fulham rallied with an outstanding strike from Ashkan Dejagah, they were quickly overwhelmed.

Only four points separate Everton from fourth-placed Arsenal – the rivals meet at Goodison next Sunday – with the Toffees also benefiting from having a game in hand.

The result leaves Fulham staring at Championship football next season, five points adrift of safety and with just six games to secure a 14th successive season in the top flight.

That prospect appears bleak, even though Norwich, Hull and Crystal Palace are due to visit Craven Cottage over the coming weeks.

Despite the spirit on display against Everton, who were unchanged following their 3-0 victory at Newcastle, it surely leaves manager Felix Magath facing an impossible mission.

Magath took the gamble of starting 17-year-old French striker Moussa Dembele and the teenager showed enough promise to suggest he was worthy of the German's faith.

Dembele was little more than a spectator as Fulham made a lively start, Everton clearing a dangerous ball from John Arne Riise before Brede Hangeland sent a looping header narrowly wide.

A glimpse of the ability that convinced Magath to start Dembele was evident in the 22nd minute when the French teenager raced clear and supplied a perfect pass to Kieran Richardson.

The vision he showed deserved a better outcome than Richardson's weak shot that meant the best move of the half went unrewarded.

A rare moment of panic in Fulham's defence came when Gerard Deulofeu crossed but the ball sped to safety with no Everton player able to reach it in time.

The final chance of the first half arrived just seconds before the interval, but Dembele was unable to convert Lewis Holtby's delicate chip.

Fulham were left to rue the missed opportunity as just five minutes into the second half Everton edged ahead with a large slice of luck forcing the opener.

A corner reached Naismith, who had replaced the injured Ross Barkley at half-time, and he drilled a low shot towards goal from the edge of the penalty area.

The ball struck Fulham defender William Kvist before being diverted into the net by the blameless Stockdale, who had been deceived by its sudden change in direction.

Just as Fulham looked in danger of being swamped, they responded with Dejagah's superbly taken goal that saw the Iranian cut inside two defenders from the left flank and beat Tim Howard at the near post with a powerful 20-yard effort.

Inspired by Dejagah's brilliant intervention, the Cottagers pressed for a second goal with Johnny Heitinga and Pajtim Kasami denied by successive saves from Howard.

Instead, the next goal came from Everton with Howard pumping the ball upfield to Aiden McGeady who released Mirallas with a precise pass.

There was still plenty of work for Mirallas to do, with the Belgium winger holding off Hangeland and planting the ball into the bottom left corner.

Fulham's defence was in disarray and could have conceded a penalty when Heitinga hacked down Mirallas, but the ball still squirted to Naismith who put the result beyond doubt. 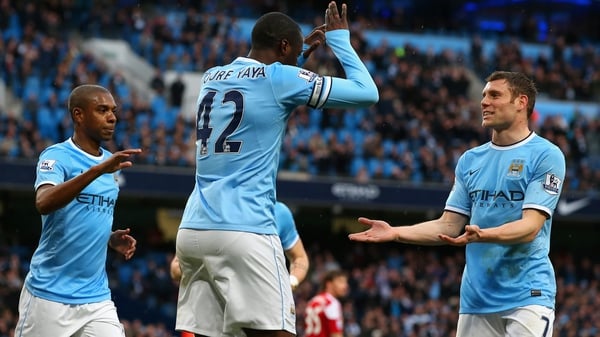