UCD made it back-to-back wins in the SSE Airtricity League Premier Division with a 5-3 victory over Bray Wanderers at the Carlisle Grounds.

Cillian Morrison hit a hat-trick for the Students, while Mark Langtry and Dean Clarke were also on target.

The Seagulls put up a brave fight but goals from Shane O’Connor, Jake Kelly and David Cassidy proved to be only consolation for Alan Mathews’ side, who had goalkeeper Shane Redmond dismissed in the 81st minute.

This fixture has traditionally yielded goals - there has been 62 goals in the last fifteen meetings between the sides - and the punters that braved the elements at the Carlisle Grounds on Friday evening certainly weren’t deprived of entertainment.

Morrison and Dean Clarke both scored in the closing minutes after Bray goalkeeper Shane Redmond was sent-off for an altercation with Michael Barker.

It proved to be the decisive moment as Morrison slotted home at the back-post on 90 minutes, to complete a remarkable hat-trick, before Clarke settled matters in the dying embers after a swift counter-attack.

The hosts had earlier recovered from a slow start, during which Morrison fired UCD into a second-minute lead, to hold the advantage at the break thanks to strikes from Shane O’Connor and David Cassidy in six first-half minutes, but spurned several opportunities and were made to pay.

Morrison’s brilliant individual effort shortly after the hour mark restored parity and when Mark Langtry fired past Redmond after a marauding run from left-back with 20 minutes remaining, it seemed that would be the end of the action.

As the Wicklow side searched for a late equaliser, Redmond became embroiled in a fracas on the halfway line and saw red for pushing Barker by referee Anthony Buttimer.

However, the numerical disadvantage didn’t hamper Bray’s search for an equaliser and Cassidy duly delivered with a sublime lob over the onrushing O’Donnell.

The action wasn’t over yet, however, as Robbie Benson’s set piece was headed back across goal by Tomas Boyle for the unmarked Morrison at the back post and Clarke ensured the victory on 95 minutes.

Unchanged from last week’s win over Athlone, the Students were quick out of the traps and caught the opposition cold.

Ayman Ben Mohamed was given too much time and space on the left but having released Clarke with a perfectly weighted ball, the striker could only poke it wide. Moments later, Morrison made no mistake after another incisive move. Ben Mohamed’s precise centre picked out the onrushing Morrison, who side-footed home from ten yards.

The majority of those in green and white had hardly touched the ball before they were forced to kick-off for the second time in quick succession but, if anything, the goal spurred them into life.

Jake Kelly, who was a lively threat throughout, had two sights of goal but on both occasions, Conor O’Donnell thwarted the winger.

It wasn’t long before they found the equaliser, however, as UCD found themselves penned into their own half. Shane Byrne fed Cassidy on the left and with Kelly occupying the full-back’s attention, the midfielder drove to the byline and cut it across for O’Connor to fire past O’Donnell.

Mathews’ side sensed blood and completed the turnaround on 21 minutes. Cassidy, who was once again the architect, spread play with a searching cross field ball to Kelly and then found himself on the end of the winger’s low cross to slot home at the front-post.

Bray were rampant but were were guilty of squandering a succession of opportunities to extend their advantage. Kelly should have got himself on the scoresheet before the break but somehow diverted Ismahil Akinade’s cross wide from three yards before Akinade fired aimlessly wide from a tight angle.

The pattern of the game changed after the break as UCD regained the spring in their step and deservedly levelled proceedings shortly after the hour mark. Out of nothing, Robbie Creevy found a pocket of space and teed up Morrison, who emphatically curled it past Redmond into the top-corner from twenty-five yards.

As UCD boss Aaron Callaghan watched on from the press box, his side hit the front on 70 minutes. A delightful one-two with Ben Mohamed allowed him to cut inside past two defenders and clinically drive home, giving Redmond no chance.

The ‘keeper was then given his marching orders but his dismissal seemed as if it wouldn’t prove costly as Graham Kelly’s perfectly executed through ball found Cassidy, who made a run from deep, and the former Drogheda midfielder looked to have secured a point with a smart finish.

However, UCD had the last word to stun the Carlisle Grounds and end their streak of seven winless visits to the seaside. 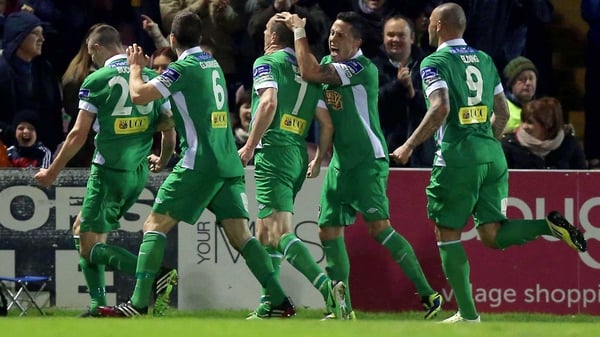