Toure struck twice from the penalty spot and curled in a stunning third before Fernandinho and Martin Demichelis completed victory at the rain-sodden Etihad Stadium.

City were not at their best but the result became a certainty after Fernando Amorebieta - who conceded the first penalty - was sent off for hacking down David Silva for the second spot-kick early in the second half.

From then on it became an exercise in damage limitation for Felix Magath's relegation-threatened side but they could do little to keep out Toure's sublime long-range effort and Fernandinho's piledriver.

Demichelis tapped in the fifth, his first City goal, two minutes from time.

Toure's goals made him the third City player to reach 20 goals for the season after Sergio Aguero and Alvaro Negredo, leaving Edin Dzeko, who missed the game through illness, behind on 18.

City rarely got into top gear in the first period although, aside from a couple of Fulham breaks, they were comfortably the stronger side.

Their pressure might have brought them two penalties inside the opening 12 minutes but each time Steve Sidwell, first for handball and then a possible trip on James Milner, escaped punishment.

Milner had City's first attempt on goal after a cross from Aleksandar Kolarov was blocked and headed towards him invitingly. The England international watched the bounce and struck his shot well but David Stockdale met it with a good save.

Fulham briefly caused a few problems and Kieran Richardson struck a free-kick into the wall.

Former Manchester United player Richardson then went closer to opening the scoring with a powerful left-foot drive that flew just wide after a Cauley Woodrow effort was blocked.

City finally got their penalty after Negredo chased a long ball from Milner and was kicked in the backside by Amorebieta.

Negredo may have made the most of the contact but referee Jonathan Moss gave his decision some thought before pointing to the spot.

Toure made no mistake as he sent the keeper the wrong way after Amorebieta was booked.

Fulham looked for a quick response but Sascha Riether spurned a good chance as he headed over from Richardson's cross.

City might have doubled their lead when the in-form Silva showed great footwork after being played in by Fernandinho and brilliantly lifted the ball over Stockdale, but Amorebieta headed off the line.

Kolarov then rattled the woodwork with a fierce drive, which Stockdale may have got his fingertips to, after being played in on the left by the impressive Milner.

City's next breakthrough came eight minutes into the second half as Milner cleverly slipped Silva through on goal and Amorebieta crudely brought the Spaniard down.

It proved the final act of Amorebieta's eventful afternoon as Moss brandished the red card.

Toure's second spot-kick proved a replica of his first and there was simply no way back for Fulham.

City applied more pressure and Milner shot narrowly over from the edge of the area after cutting onto his left foot following neat work by Silva.

Fulham could do little about Toure's hat-trick goal after Samir Nasri took a short free-kick.

The Ivorian, reprising his Capital One Cup final stunner, took aim from about 25 yards out sent a wonderful curling effort into the tiny gap between the diving Stockdale and the post.

Fulham could have been overwhelmed quickly as Kolarov tested Stockdale with a fierce drive and Milner saw an effort deflected wide after combining with Negredo.

Toure got a standing ovation as he was withdrawn after 77 minutes and Demichelis almost netted as John Heitinga cleared his effort off the line.

The fourth came six minutes from time as a well-worked corner found its way to Fernandinho and the Brazilian smashed home from inside the box.

The pressure continued and Milner shot saved before Demichelis tapped in a rebound after Stockdale blocked from substitute Stevan Jovetic.

Negredo, without a goal since January, might have scored in injury time but missed from close range. 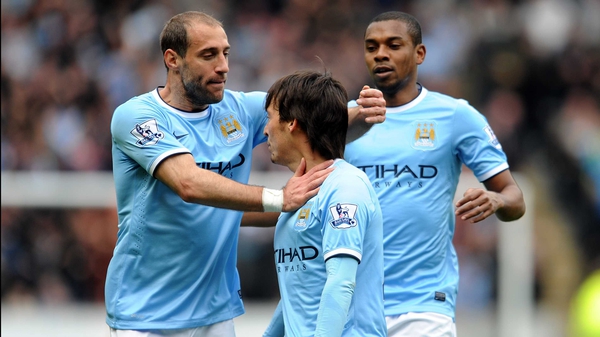