Fulham's bid for Premier League survival received a timely boost with a 1-0 victory over Newcastle, whose banned manager Alan Pardew watched on helplessly from a west London hotel.

Ashkan Dejagah struck eight minutes after coming on as a second-half substitute to give Felix Magath his first win as Fulham boss at the fourth attempt in Newcastle's first match since Pardew's headbutt of Hull midfielder David Meyler earned a three-match stadium ban.

It was the Cottagers' first Premier League win since January 14 against Norwich, following two points in the intervening eight games, and the remaining eight matches will determine their fate.

Fulham thought their goal had come earlier as twice in the opening 10 minutes of the second half they had the ball in Newcastle's net, only for Pajtim Kasami and Cauley Woodrow's efforts to be ruled out for offside.

Woodrow put the ball in after Johnny Heitinga's shot had bounced down off the crossbar and, replays showed, by the smallest of fractions, on to the line.

Referee Howard Webb - fourth official at KC Stadium when Pardew had his moment of madness - looked at his watch awaiting news from the Decision Review System which never came.

It mattered not as David Stockdale made a crucial save from Papiss Cisse and Dejagah, who was unable to complete the game, netted on the break to inflict Newcastle's fifth successive loss at Craven Cottage.

Pardew made two enforced changes before waving goodbye to the squad at the team hotel and watching the action on a live feed.

Injured pair Loic Remy and Mathieu Debuchy were replaced by striker Cisse and captain Fabricio Coloccini, who led by example in the absence of his manager.

Magath is still searching for his best team as he made five changes following the loss at Cardiff, with no place in the squad for #12million January signing Kostas Mitroglou.

The German believes Fulham's players have only belatedly awoken to their predicament at the foot of the table and ahead of the match targeted victory in all five remaining home games.

With Everton, Norwich, Hull and Crystal Palace to follow, Magath was looking for a defeat of the Magpies to provide the catalyst for a late survival push.

Fulham started  brightly. Brede Hangeland occupied the defence as a Lewis Holtby free-kick found its way towards Woodrow, who was unable to get a foot on it and Tim Krul collected.

An Alex Kacaniklic corner evaded everyone and the Swede fired over from 35 yards before Krul was at full stretch to deny Holtby after the ball broke to the on-loan Tottenham forward in the right channel.

Newcastle had chances from set-pieces - Paul Dummett curled one free-kick narrowly off target - and on the break.

Moussa Sissoko raced down the right and his cross went by Luuk de Jong to Cisse, who thought his strike was destined for the bottom corner until Stockdale turned the ball round the post.

Fulham had the ball in Newcastle's net in the first skirmish of the second half, but Steve Sidwell was offside in heading back to Kasami and Heitinga was then denied by goal-line technology, with Woodrow offside in following up.

Stockdale again justified his selection ahead of Maarten Stekelenburg with a fine save after Cisse had got in behind the Fulham defence.

The hosts broke and the ball was moved left to Dejagah, who had replaced Kasami.

He cut inside before unleashing a vicious shot which bounced under Krul.

The Iran winger, who was booked for his celebration, had needed a fitness test to take his place on the bench and was unable to complete the game, limping off in the closing minutes as defender Dan Burn came on in his place.

Krul went up for a last-gasp corner and thought he had forced a handball in the box, but Webb disagreed and Fulham held on to the relief of much of Craven Cottage. 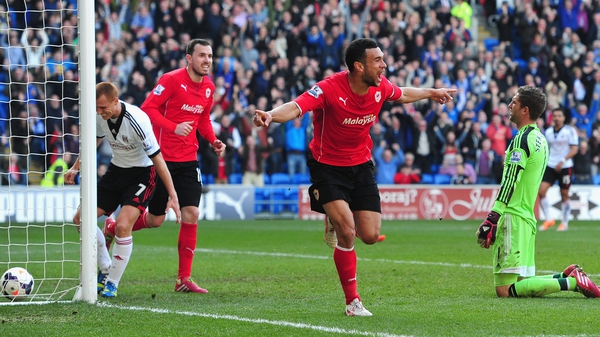