Athlone Town played their first home Premier Division match in 18 years at Lissywoollen but their party was crashed by Shamrock Rovers, who cruised to a 4-1 victory at the midlands venue.

Two Ciarán Kilduff strikes and one each from Gary McCabe and Eamon Zayed gave Rovers their first victory of the new campaign, and Alan Byrne struck an injury time consolation for the hosts.

A mistake from Paul Skinner in the Athlone goal allowed Kilduff to open the scoring in the 20th minute and a fast break 10 minutes later left Gary McCabe clean through on goal, where he produced a cool and measured finish.

Kilduff’s second strike immediately after the half time interval ended the game as a contest, and Zayed and Byrne concluded the scoring in the closing minutes.

1,793 supporters turned out for Athlone Town’s first home Premier Division tie in 18 years, but in truth their team never got going in the tie and had to wait until midway through the second half for their first corner and the last five minutes of play for their first shot on target.

Rovers dominated the tie from start to finish and could have doubled their tally but for some near misses, including a strike from Ronan Finn that crashed off the post and a last ditch tackle from Mark Hughes that seemed to save a certain goal from Luke Byrne.

Nonetheless Trevor Croly will have been pleased just to get a first league win of the season under their belt in advance of next Friday night’s Dublin derby against Bohemians, a tie that will be all the more spicy due to the unbeaten start made by both teams.

Due to a problem with the floodlighting there was a delay to the start and it looked for a time as if referee Tomás Connolly was going to abandon the fixture, but once the game got underway Shamrock Rovers got right into their rhythm and wasted no time in making good ground down both flanks, going closest to scoring when Ciarán Kilduff failed to get sufficient purchase on a cross from Seán O’Connor.

Kilduff did open the scoring for the away side but it was a goal that was gifted rather than chiselled, as Paul Skinner dropped a corner kick right at his feet, allowing the big striker to tap in an easy goal.

There was plenty to admire about Rovers’ second strike, an accurate and composed finish from Gary McCabe after a slide rule pass from Shane Robinson put him through on goal with just Skinner to beat in the 31st minute.

Whatever hope Athlone supporters may have had of mounting a comeback was extinguished immediately after the restart, when the excellent Simon Madden made good progress down the right wing and played a teasing delivery across the six yard line.

A subtle touch from Derek Prendergast appeared to wrongfoot Kilduff at the far post, but the striker reacted brilliantly, hooking the ball to the net with his back to goal.

Athlone manager Mick Cooke emptied the bench in the 66th minute in a bid to turn the game around but his policy backfired when centre-back and captain Aidan Collins was forced off with a wrist injury, leaving Athlone down to ten men for the last ten minutes.

Rovers’ substitute Zayed made them pay in the 89th minute when he slipped the ball underneath Skinner for the fourth goal of the tie on a fast break out of defence, though Athlone did get the ball narrowly across the line deep in injury-time to cancel out that strike, Alan Byrne getting the last touch on a goalmouth scramble. 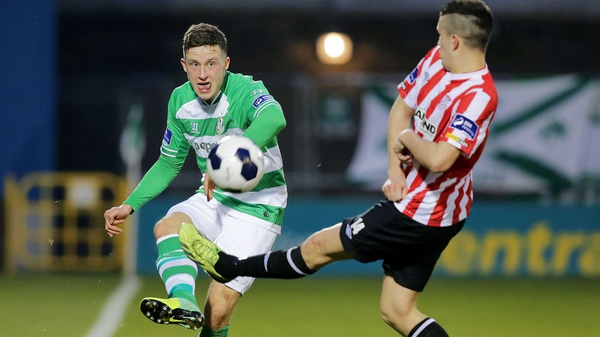