Sandro has revealed Tottenham's players were locked in a furious two-hour crisis meeting on the back of Saturday's heavy defeat at Chelsea.

Head coach Tim Sherwood made the headlines following the 4-0 defeat as he accused some of his players of lacking character and being too friendly on the pitch.

And, while the boss was facing up to the media, the players were holding their own inquest.

"We spent more than two hours in a meeting amongst the players and we said what we had to say," Sandro said.

"From now on, we know that we all have to listen when anyone says something. It was after the manager's conference with the press.

"We had a meeting with the players. Sometimes one player got a bit more stressed out and we tried to calm him down and talk in a nice way. We spent about two hours that way. Every player had their fair share to say, put it that way. We all spoke amongst ourselves.

"For me, to be honest, it helped a lot because now I can go and tell another player, and another player can tell me. The manager likes it. Everyone can go for it now, and I think it will help.

"I think that is positive from ourselves and we have to show in the next match that we can do much better. And we will prove that. I am sure we will show much more character in the next matches."

"The  manager said we need to show more character. Maybe it is that" - Sandro

Sandro also admitted Sherwood had repeated his media comments to the players at Stamford Bridge.

"He said the same thing to us as what he said to the press," the 24-year-old said. "I know the manager is with us and we are with the manager. We need to show a bit more in next match to tell the manager that we care. We will do that.

"Sometimes when you lose games in that way everyone gets cross and we all scream and shout.

"Maybe some managers shout more than others. [Former manager Andre] Villas-Boas, for example, liked to pull you aside and have a nice chat to you to explain things.

"But other managers are more vocal. As professional football players, we have to work with all managers and do our best for them and for us."

Tottenham now face another season-defining week as they welcome both Benfica and local rivals Arsenal to White Hart Lane.

And Sandro is hopeful Sherwood's comments and the honest debate among the players can lead to a positive on-field reaction in Thursday's Europa League last-16 first-leg clash with the Portuguese league leaders.

"After a match like this [against Chelsea] we were all upset with what happened on the pitch and I think we have to put in some more effort than we did," he added.

"The  manager said we need to show more character. Maybe it is that. We have this big game against Benfica, where we can show that we are better than that." 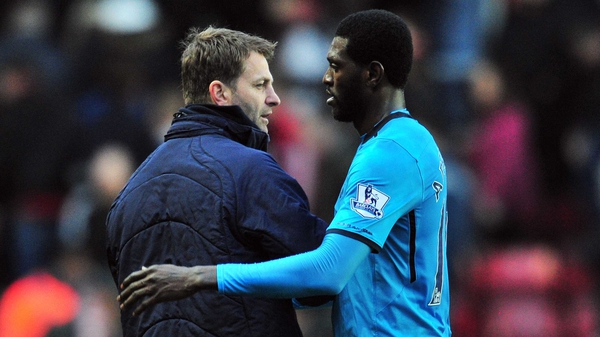