Sligo Rovers made a winning, if unconvincing start to their SSE Airtricity League Premier Division campaign with a narrow 2-1 win over a well organised Athlone Town at the Showgrounds.

Following a largely uneventful opening half, Philip Gorman sent the Midlanders into an unprecedented lead from the penalty spot on 53 minutes before John Russell equalised for Rovers ten minutes later.

Mick Cooke's side almost came away with a hard-fought draw, but substitute Evan McMillan broke Town hearts on 87 minutes as he turned in Russell's cross from the right.

Sean Maguire - on loan from West Ham - made his first competitive start for the Bit o'Red as a lone striker.

Athlone made their first league appearance at the Showgrounds since February 1996 without suspended duo Derek Prendergast and Barry Clancy. James O'Brien and Alan Byrne both recovered from knocks in time to take their places in the Town starting eleven.

It was Ian Baraclough's side who looked the livelier during the opening exchanges of a relatively low key first half. Danny Ledwith's free kick from the edge of the Athlone area struck the inside of Paul Skinner's post as early as the second minute after Maguire was upended.

Rovers' Aaron Greene almost caught Skinner unaware on eleven minutes. His mis-hit cross from the wing sneaking behind the Athlone net minder but over the crossbar, much to the relief of the large travelling support.

The only opportunity of note that the First Division champions could muster during the opening 45, was a shot from distance from O'Brien after he robbed the ball from the shaky Ledwith on the halfway line. Rovers goalkeeper Rogers dealing comfortably with the midfielder's effort.

Sligo centre halves Jeff Henderson and Kalen Spillane both went close with half chances on 29 and 31 minutes respectively as Cooke's side did well to starve Rovers of any clear cut opportunities, on a slick Showgrounds surface.

Henderson saw his acrobatic effort sail over the crossbar while Spillane's speculative shot was deflected over Skinner's crossbar by Aidan Collins.

The start of the second period began in similar fashion to the first. David Cawley going close with a free kick from 25 yards, Skinner doing well to push away the Mayo man's low effort.

Skinner was alert on 48 minutes when he again did well to keep out another Cawley effort. Possession fell to the lively Eric Odhiambo who failed to put enough power behind his chip, which narrowly avoided the target before being cleared away at the back post for a corner by Kealon Dillon.

Sligo were lucky not to have Henderson sent off on 52 minutes. His dangerous two footed challenge on Philip Gorman in the centre of the pitch only resulting in a caution from referee Rob Rogers.

The opener then came a minute later. Sligo's Ledwith handled the ball inside the area as it made its way toward goal from shot from the angle. Gorman stood up and expertly placed the ball past the hapless Rogers from twelve yards, stunning a now silenced Showgrounds.

John Russell sent an effort from distance over the crossbar on 56 minutes. Alan Byrne did well to get his body in front of Odhiambo's drive four minutes later following some good work from Maguire as Rovers pressed for an equaliser.

The leveller then came on 63 minutes. Some good interplay between Odhiambo and Cawley resulted in the latter's floated cross to the back post being met by the head of the prowling Russell who nodded in from close range.

It was his first goal for the cup holders since returning to the north west from league champions St Pat's.

Baraclough introduced Raffaele Cretaro and Paul O'Conor to the game in an effort to capture the full quota of points. Cretaro forced Skinner into a full stretch save on 69 minutes with a shot from 20 yards.

O'Conor almost latched on to the end of a Ledwith ball from deep on 76 minutes, but Skinner did enough to put the former Drogheda man off as he prepared to pull the trigger.

The Sligo boss then took the unorthodox decision of withdrawing centre forward Maguire and introduced centre half Evan McMillan in his place. The latter now leading the Rovers line with a quarter of an hour left to play.

The move paid off however as Rovers took the lead with three minutes remaining. The energetic John Russell did well to shrug off the attention of his marker at the end line before drilling the ball low and hard into the six yard box. McMillan threw off two Athlone defenders before turning the ball past Skinner and into the net.

Athlone's O'Brien stung the palms of Rogers a minute into injury time before seeing his volley float over the crossbar seconds later.

Odhiambo should have put the game to bed on 94 minutes.

McMillan's clever dummy as he ran over an O'Conor ball from wide right fell to Odhiambo, but Skinner was equal to the Englishman's rasping drive. 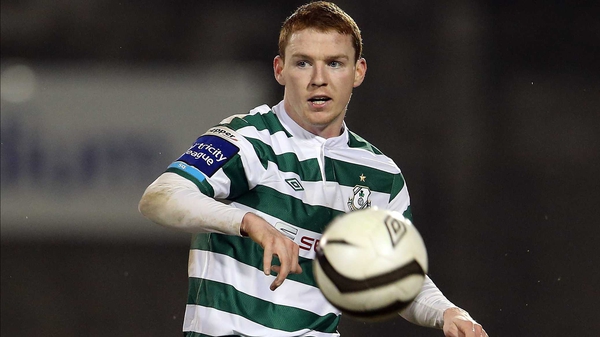