Ireland manager Martin O’Neill says his attendance at League of Ireland games this season will not just be a public relations exercise and that he hopes to unearth some new talent.

Seamus Coleman and James McClean are among a number of current Ireland players who previously plied their trade in the League of Ireland and the former Celtic boss is hopeful that other players can emerge from the league.

Speaking at the launch of the SSE Airtricity League season at the Aviva Stadium today, O’Neill, who started off his playing career with spells at Derry City and Distillery, said: “As someone who played domestic football in Ireland I understand the importance of the domestic game and congratulate all the managers and players here today for the tremendous work you are doing to develop Irish football.”

The SSE Airtricity League Premier and First Divisions will commence on Friday, 7 March, and a total of 330 league and play-off games will be played in addition to matches in the FAI Ford Cup, EA SPORTS Cup, President’s Cup, Setanta Sports Cup, UEFA Champions League and UEFA Europa League.

Before that, league winners St Patrick’s Athletic and cup holders Sligo Rovers face off in the inaugural President’s Cup this Sunday at Richmond Park, 4pm.

Both O’Neill and his assistant Roy Keane will attend the game.

The opening-weekend fixture between Shamrock Rovers and Derry City will be shown live on RTÉ Two on Sunday 9 March, 5.25pm.

Meanwhile, the director of the league, Fran Gavin, warned of attempts by outside groups to influence the outcome of games.

Matches in the league can attract worldwide gambling interest and a confidential phone line is being set up to report any concerns from players or clubs. 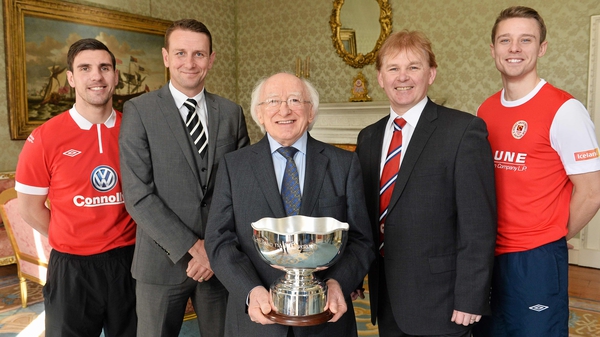