The third-placed Blues on Monday face a City side who beat West Ham 9-0 in the two-legged Capital One Cup semi-final, after themselves failing to find the net in the London derby as a result of a resolute display from Sam Allardyce's men.

"A football match is about two teams playing and this match was only one team playing and another team not playing," Mourinho said.

"I told Big Sam and I repeat my words: They need points and, because they need points, to come here and play the way they did, is it acceptable? Maybe, yes.

"I cannot be too critical, because if I was in his position I don't know if I would do the same. Maybe.

"At the same time I told also this is not Premier League, this is not the best league in the world, this is football from the 19th century."

Chelsea tried everything to unlock the Hammers defence and when they did they found goalkeeper Adrian in supreme form.
Mourinho added: "The only (other) thing I could bring was a Black and Decker (tool) to destroy the wall."

Mourinho pointed to time-wasting and aimless long balls to illustrate his point, which he had made to Allardyce after the game.

"He was laughing," Mourinho added.

"He takes the point. After that he's a happy man and I'm a sad guy."

Despite injuries to Joey O'Brien, who faces around three months out with a dislocated shoulder, and Mohamed Diame, who suffered a bang on the knee, Allardyce was in jovial mood afterwards.

Allardyce said: "He (Mourinho) can't take it, can he? He can't take it because we've out-witted him. He just can't cope.

"I love to see Chelsea players moaning at the referee, trying to intimidate him, Jose jumping up and down saying we play c*** football.

"It's brilliant when you get a result against him. Hard luck, Jose."

Chelsea next play a City side who beat Tottenham to go top of the Premier League.

Mourinho added: "Are they favourites? Yes. Are they even favourites to score again four, five, six goals? Yes. 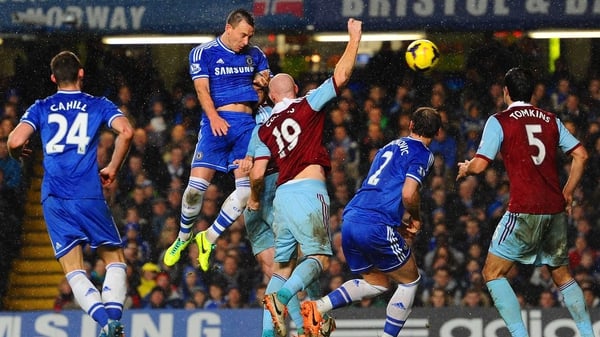