Tim Sherwood has admitted that his good start as Spurs boss will count for little if he can't secure Champions League football.

Tottenham's 3-1 win over struggling Swansea City took Sherwood's record since replacing Andre Villas-Boas to five wins in six league matches, and moved them up fifth place, level on points with Liverpool but with an inferior goal difference.

Despite making an encouraging start since surprisingly being appointed on a 18-month contract in December, 44-year-old Sherwood knows nothing but a top-four finish will be good enough for the club's notoriously tough chairman Daniel Levy.

"It's been good," he said. "We know there are going to be tougher tests ahead, but it's been a good start for me.

"If the season were to end tomorrow, I don't think the chairman would be too happy because we are fifth.

"The final league position has to meet the expectation of the club otherwise it's 'goodbye Charlie'."

Sherwood has been praised for bringing back a more attacking style and abandoning Villas-Boas's preferred method of playing with a single striker, in favour of a traditional 4-4-2 formation.

He reverted to 4-5-1 on Sunday to great effect, with Christian Eriksen free to roam and striker Emmanuel Adebayor scoring twice, either side of Chico Flores's own-goal.

"The final league position has to meet the expectation of the club otherwise it's 'goodbye Charlie'." - Tim Sherwood

Adebayor had played only 45 minutes under Villas-Boas this season, but since being brought back into the fold under Sherwood the Togo international has helped spark Spurs into life, scoring five league goals in the past six matches, as many as Roberto Soldado has managed all season.

Keeping Adebayor happy and in form will be crucial to Tottenham's hopes of staying in contention for a top four spot, but Sherwood played down his impact on the 29-year-old's resurgence.

"I haven't said anything to him, I have just given him the stage to play on - he hadn't had that stage for a while," Sherwood said.

"We just needed to get some consistency out of him and I am sure if he continues to enjoy playing he will keep performing well.

"He is enjoying it, if you enjoy yourself playing football you will get the best performances out of yourself." 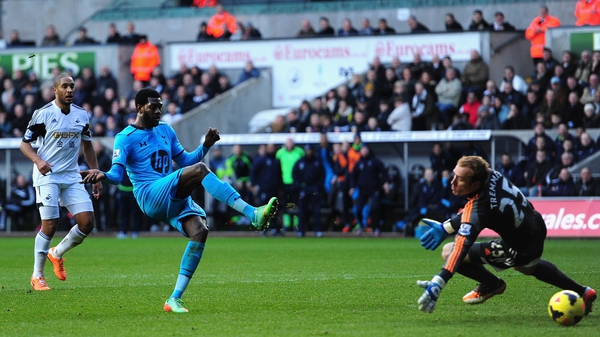