Cristiano Ronaldo is doubtful for Real Madrid's Champions League match against Galatasaray on Wednesday after doctors confirmed he has a hamstring strain.

The Portuguese limped off at the start of the second half of Saturday's La Liga victory over Almeria but fears of a serious injury were immediately played down by coach Carlo Ancelotti afterwards.

Ronaldo left a medical examination on Monday morning telling reporters "I am fine", but the club released a statement saying: "there is an injury to the back of the thigh which will be monitored."

Ronaldo has been in fine form recently with 14 goals in seven games for his club and country and the injury comes after a demanding start to the season where he has played every match so far.

He could now well miss the Galatasaray match at the Bernabeu where anything less than a heavy defeat will see them qualify in first place from Group B.

Meanwhile, Barcelona defender Adriano has been ruled out of Tuesday night's Champions League clash against Ajax with an ankle injury.

The official Barca website confirmed the 29-year-old Brazil international "sprained the ligaments in his left ankle" during Saturday's 4-0 victory over Granada at the Nou Camp and will be sidelined for the Group H match at the Amsterdam Arena. 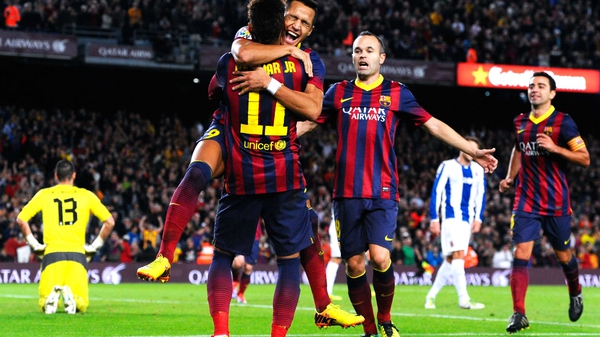 Review: Wins for Barcelona and both Madrid teams in La Liga