Sweden coach Erik Hamren believes Portugal are heavy favourites to win their World Cup play-off, but also knows they have a deadly weapon of their own in striker Zlatan Ibrahimovic.

The two teams meet in Lisbon for the opening leg tonight before the return match at Stockholm's Nationalarenan next Tuesday to decide who will progress to the tournament in Brazil next summer.

Statistics from the qualifying campaign suggest there is little to choose between the two sides. Both won six matches, with Sweden finishing runners-up to Germany in their group, which included Ireland, and Portugal missing out on top spot to Russia.

Hamren, however, feels Portugal hold the advantage although he insists the Scandinavian nation should not be written off either.

"All the players are ready and we're looking forward to the game," he told a press conference.

"Portugal are favourites. They are favourites because of their ranking. They are the highest-ranked team in the play-offs and, in my opinion, they are world class when they play at a really high level.

"So for us they are big favourites, but we have belief in ourselves to try to get a good result. That's the challenge and we're working hard for it."

"Zlatan is in really good shape which is important for us"

Much has been made of the meeting between two of world football's biggest stars: Paris St Germain star Ibrahimovic and Real Madrid forward Cristiano Ronaldo.

Both players have been in sublime form for their clubs so far this season and the tie could rest on which of them proves most accurate in front of goal.

Hamren revealed he is full of admiration for Portugal's hero but is confident Ibrahimovic can cope with the pressure he carries as Sweden's biggest name.

"There's lots of light on Zlatan," said the coach. "He's a world-class player and our captain.

"But I don't think it's too much for him. He's so used to that so it's not problem for him.

"He's been scoring a lot this season and last season too. It's really good (for us) but you can also say Ronaldo has scored some goals, so I think it's even between those players.

"But Zlatan is in really good shape which is important for us.

"It's a fight between two world-class players but we need the team as a whole to be good. Zlatan needs that support. If we are playing well as a team then he can be the match-winner."

Live radio coverage of Republic of Ireland v Latvia from 19:00 on Friday 15 November on Game On on RTÉ 2fm and RTÉ.ie (Worldwide). Television highlights from 22.40 on RTÉ Two and RTÉ.ie (RoI only). 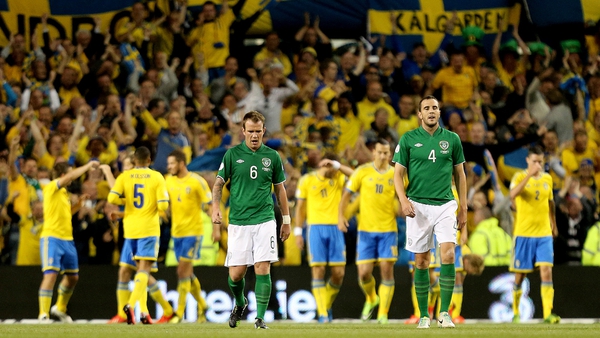