By Ed Leahy at The UCD Bowl

Shamrock Rovers kept up their hopes of qualifying for Europe with an emphatic 4-1 victory over UCD in tonight’s Airtricity League Premier Division encounter at The UCD Bowl.

Two goals within as many minutes early in the game put Rovers in charge as Shane Robinson and Gary McCabe handed the visitors a two-goal lead.

Robbie Benson’s close-range effort pulled one back for UCD, but the visitors hit back with two more goals from McCabe and Tommy Stewart to secure the points ahead of the final game of the season next weekend.

The Students may have thought they were out of relegation danger a few weeks back but recent results elsewhere have contrived to drag Martin Russell’s side back into the relegation play-off battle.

The home side almost got the perfect start in the opening minute as the Hoops defence were left to watch Robbie Creevy burst through from midfield with only the keeper to beat.

But Richard Brush was alert to the danger and rushed off his line to narrow the angle and block Creevy’s effort to keep the sides level.

The visiting Hoops kicked into gear following the early scare and took their first chance to take the lead with just eight minutes on the clock.

McCabe, back playing in his more familiar position wide on the right, made a great run down the flank before lifting a delightful ball into box where captain Robinson was on hand to stab the ball home.

That opening goal stunned the lively Students and a minute later they were sickened as Stewart was taken down for a penalty by UCD keeper Conor O’Donnell.

From the low-lying press box, it looked as if the keeper might have got something on the ball but the referee was on hand and had no hesitation awarding the penalty.

McCabe sent the keeper the wrong way with an excellently executed penalty kick to double the Hoops lead.

UCD needed to regroup after the double body-blow but they only know one way to play and continued to bomb forward, which was great for the neutral but left gaping holes in behind their midfield.

Rovers enjoyed a string of chances but failed to capitalise with O’Connor, Sullivan, Finn and Ryan all trying their luck. Ryan’s effort was the best of the lot following some slick passing on the accommodating Belfield pitch.

With Rovers full-backs getting in on the attacking act, UCD were also finding space going forward and were almost rewarded after Dean Clarke turned inside to feed Benson, but his rasping shot was beaten away by Brush to keep Rovers’ two-goal lead intact at the break.

The second half would resume as the opening period finished with great pace and play by both sides, with the biggest cheer of the night from the paltry crowd reserved for Rovers substitute Stephen Rice who came on for the injured Richie Ryan.

What followed was end to end, free flowing football from both sides yet neither goal was tested apart from a Stewart strike that found the back of the net but was ruled offside and a well-struck effort by UCD full-back Mark Langtry, which flew the wrong side of the post.

And then the game appeared to drift back in UCD’s favour as the Students were rewarded for their endeavours with Benson poking the ball home from a Sean Russell corner, after the ball had skipped past several bodies in the box.

But College were unable to maintain that momentum and Rovers restored their two-goal advantage four minutes later as McCabe, now playing wide on the left, cut inside and drilled an unstoppable effort past O’Donnell at his near post.

That goal knocked the stuffing out of the UCD challenge and they were put out of their misery three minutes later as a long-range Robinson effort was only parried by the diving O’Donnell and Stewart stayed onside to clip the ball home.

UCD still pushed forward, if only at this stage to help with their goal-difference, and were almost handed a late consolation as a long-range Creevy effort came off the bar but O’Halloran could only blast the rebound over.

Jason McGuinness almost added a fifth for Rovers in the final minute but smashed the dropping ball high.

Rovers late charge for Europe now goes down to the final game of the season at home to Sligo next Friday, while UCD will need to better Bray or Bohemians’ result to secure Premier Division football at the Bowl in 2014. 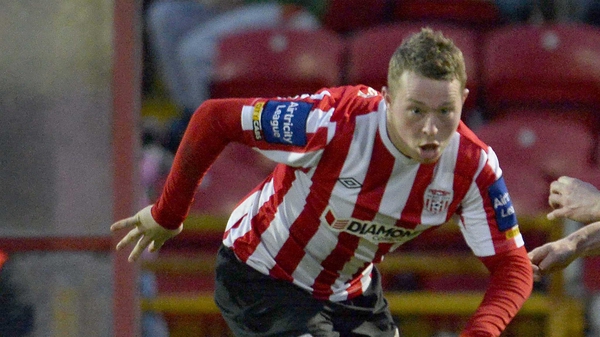