A Rory Gaffney goal saw Limerick defeat Shelbourne 1-0 in the Airtricity League Premier Division and leave the Dublin club on the brink of relegation.

Shelbourne will now go down if Bray Wanderers earn a point from either of their remaining matches against Bohemians and Dundalk.

This was a hugely frustrating game for Shels, who created a host of chances, but were unable to capatilise on them.

Limerick did in the 27th minute when Gaffney scored following a Carel Tiofack corner, while Shelbourne then went on to waste several opportunities.

The opening quarter was all about the heavy midfield traffic as neither side was able to enjoy any significant passing patterns.

Shelbourne boss Johnny McDonnell had Pat Flynn stationed in front of the visiting back four and they were safe and solid initially.

There were glimpses of skill in the centre of the park from Limerick's Stephen Bradley, but with several first choice players absent the Blues were a little short in the last third.

In the 16th minute Shels winger Dylan Connolly forced Limerick custodian Barry Ryan to make a reflex save as the Dubliners pushed for a vital victory.

But they were rocked on 27 minutes when they failed to deal with a Carel Tiofack corner with Rory Gaffney sweeping Limerick ahead.

Shelbourne did respond with a bit of character as Graham Gartland had a 38th minute effort deflected out for a corner.

Then in the 40th minute a Dean Kelly attempt was expertly saved by Barry Ryan as Shels pushed for a leveller.

It nearly arrived too on 43 minutes as Derek Doyle's thumping delivery found Stephen Sheerin, but the midfielder was unable to supply the required finish.

Eight minutes after the restart it was a similar story when Doyle provided another cross with Kelly blasting high.

Kelly then shot wide on the hour mark and three minutes later Ryan palmed a stinging Adam Hanlon attempt over the bar.

And with 10 minutes left Kelly missed another chance and Limerick held on for a satisfying victory, while Shels now must hope for favours elsewhere. 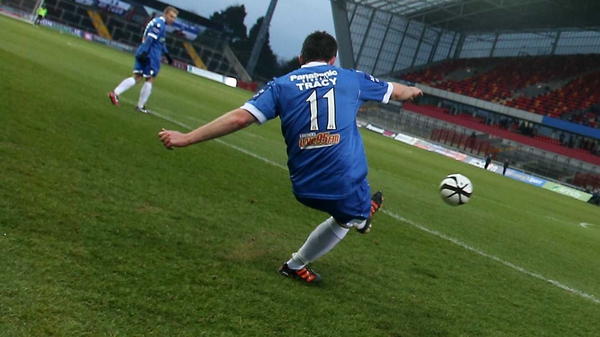