Derry City moved back into fourth place with a comfortable 3-1 win over relegation-threatened Shelbourne in the Airtricity League Premier Division at the Brandywell.

A penalty from Rory Patterson on two minutes was quickly followed by a goal from Michael Rafter and Shelbourne had it all to do with just 15 minutes gone.

Dean Kelly pulled a goal back midway through the first half but within 60 seconds Derry had their two goal lead back, Rafter heading in his second after good work from Barry McNamee.

Shels failed to clear their lines from a corner and Pat Flynn bundled into the back of Rory Patterson and gifted the hosts a penalty with just 85 seconds on the clock.

Patterson, who missed his last spot kick against Sligo Rovers, showed no hesitation in stepping up and he rifled the ball low and hard past Murphy to give Derry the lead.

Derry’s lead could have been short lived however as Shels responded impressively and Sean Brennan raced through on goal, only to be caught up by Shane McEleney who blocked the striker’s shot with a superb tackle.

The danger was not away for Derry as the ball ran loose for Robert Bayly, but his effort was heroically blocked by Ryan McBride as the Derry defenders sent an early message that they wanted that elusive clean sheet.

Ten minutes in, Shels should have levelled and again Bayly was involved as he crept behind the Derry defence again before showing the presence of mind to roll the ball across the face of the penalty area for Brian Gannon whose shot was brilliantly saved by Gerard Doherty at point blank range.

The loose ball bounced up into the six yard box but Derry were able to clear for a corner.

Derry the scored again on 12 minutes, and Shelbourne were left furious again by the decision to award the goal.

A ball forward from Ruaidhri Higgins attempted to find Michael Rafter but was intercepted by defender Paul Andrews. The centre half had control of the situation until he lost his footing allowing Rafter the simple task of racing through and sliding the ball past Murphy for his second goal in two games at the Brandywell.

Shels were far from happy with both goals but there was no shortage of encouragement at the other end, with Doherty just as busy as Murphy, the Derry goalkeeper having to tip an effort from Brennan past the post as space again opened up in the Derry defence.

Shels pulled a goal back when a simple kick downfield from goalkeeper Murphy eluded the Derry defence and Dean Kelly raced through before sending an accurate lob over Doherty and into the net to half the deficit on 35 minutes.

However, normal service was resumed within seconds as a cross from the right by Simon Madden found Barry McNamee at the back post and the young midfielder headed the ball back across the area to Rafter, who sent a perfectly times glancing header behind the dive of Murphy and into the net to make it 3-1.

The second half was bereft of goalmouth action as Derry worked hard to hold onto their lead.

Shels were doing their best to attempt to put the makeshift pairing of Molloy and McBride under pressure, with Adam Hanlon and Bayly pushing forward more and more in support of Kelly, but the danger remained with the hosts.

A cross from Simon Madden was too high for Rory Patterson but it arrived for Dean Jarvis at the back post who volleyed it goalwards. Murphy parried the ball again but directly back to Jarvis who tried again, but this time he sent his shot wide of the target.

Johnny McDonnell emptied his bench in a desperate attempt to change the game for Shelbourne but it was just not happening for the visitors whose hopes finally ended just five minutes from time.

Gannon, already on a yellow card, went to ground in the penalty area and received a second yellow for simulation, leaving his team mates to battle with ten men in the last 15 minutes.

Shelbourne may have pulled a goal back deep into added time when Murtagh’s through ball put Paul Andres through, but Doherty saved well low to his left. 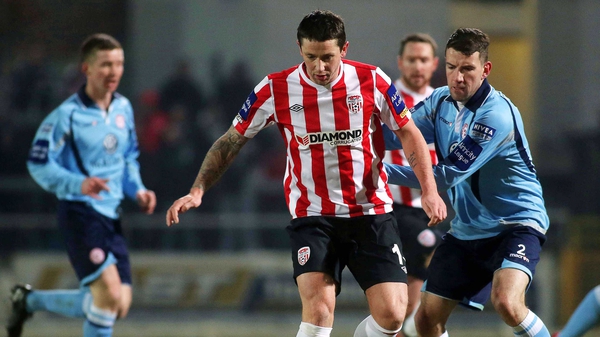