Athlone Town can secure the Airtricity League First Division title and an automatic return to the Premier Division this evening by beating Waterford United at Athlone Town Stadium.

Roddy Collins' side, who are currently on 52 points, need to reach 54 points to be mathematically certain of not being caught but they could be crowned champions if they draw and Longford Town fail to beat Mervue United in Fahy’s Field.

In the Premier Division, St Patrick’s Athletic moved six points clear of second place Dundalk last night with a 3-1 win over Bray Wanderers and Stephen Kenny’s side must win at home against Limerick to remain in touch with the Inchicore side.

The Lillywhites will be without captain Stephen O'Donnell, who is suspended following a red card last week while top goalscorer Patrick Hoban is sidelined with a groin injury.

However, Kenny is able to welcome back Chris Shields and Darren Meenan from suspension.

Fresh from an impressive 2-0 victory over Shamrock Rovers, Limerick will go into this encounter full of confidence and can welcome back winger Danny Galbraith from injury.

The game comes too soon for central defender Brian O’Callaghan (groin) but full-back Shane Costelloe (ankle) comes back into contention.

Third placed Sligo Rovers host bottom of the table Shelbourne at the Showgrounds and require a win against the strugglers to keep their title hopes alive.

Sligo are in a rich vein of form at the moment and will be eager to keep the pressure up on St Pat's and Dundalk with a win.

Ross Gaynor is their only absentee as Evan McMillan returns from injury and Raffaele Cretaro is available after serving a suspension.

Bottom side Shelbourne are just as desperate for the points but have major injury concerns. Glenn Cronin has joined Paul Crowley,  Brian Shortall, Mark Leech and Jack Memery on the injury list.

Elsewhere, Bohemians meet Derry City at Dalymount Park having finally put some breathing space between themselves and the automatic relegation spot.

The Gypsies are five points clear of Shelbourne now, albeit having played a game more and will be hoping to at least maintain that advantage.

Defender Anto Murphy faces a late fitness test with a hamstring strain, with Neil Yadolahi or Daniel Byrne available to replace him.

Derry meanwhile are chasing a European place but will be without the services of Barry McNamee and Ryan McBride through suspension, while Stewart Greacen (knee) Kevin Deery (knee) and Tomas Crawley (Groin) and on the long term injury list.

In Turner's Cross Cork City meet UCD and will be hoping to maintain their impressive recent home form.

Colin Healy and John Dunleavy both return after suspension, while long-term absentee Darren Dennehy has returned to training but is not yet match fit. Kevin Murray remains sidelined with a groin injury.

The Students meanwhile are not out of the relegation dogfight yet and are still chasing points to secure another season of top flight football.

They'll be without the services of Tomas Boyle (nose), Aymen Ben Mohamed for the trip Sount.

Last week’s EA SPORTS Cup finalists Shamrock Rovers and Drogheda United clash again at Tallaght Stadium and the Hoops will be searching for another win as they seek to keep up the pressure in the race for a European place.

Ronan Finn (groin) and Richie Ryan (illness) are both doubtful for this encounter, while Karl Sheppard still has an abdomen problem despite playing in Tuesday’s game, which will again have to be assessed before tonight's game.

Drogheda will be without Derek Prendergast, who is still suspended having been sent off in the EA Sports Cup final defeat while Gavin Brennan returns to the side after he was rested due to a shoulder injury. 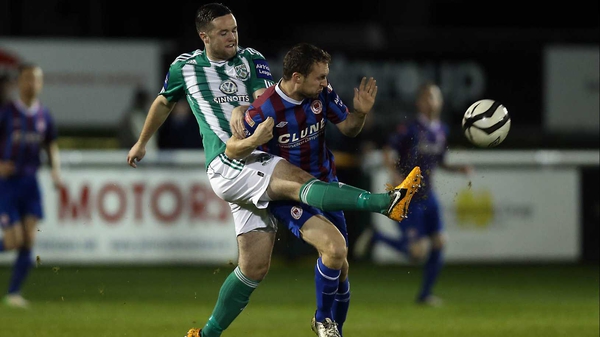