Level at the interval Pat's took charge once Fagan headed home an Ian Bermingham assist in the 53rd minute.

Fagan pounced again on 59 blasting a goal after Ger Hanley had made an excellent reflex save to deny Killian Brennan.

13 minutes from time Forrester got the final touch following a Brennan corner and then on 79 Shels had Jack Memery red carded for a foul on Ger O'Brien.

Pressing the visitors high up the pitch Shels, with Kevin Doherty taking charge after Alan Mathews resignation, enjoyed a few encouraging moments in the opening quarter with their youngsters contributed plenty of industry. 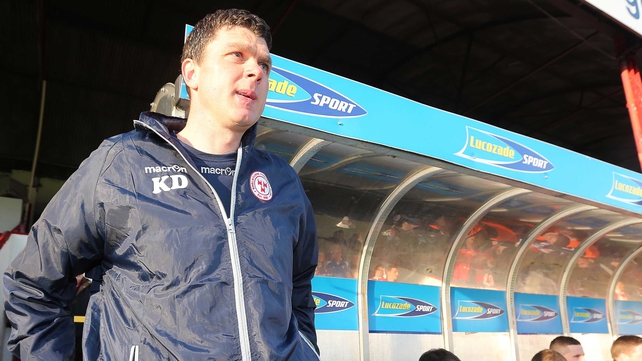 It wasn't that the Saints were overly stretched or anything, but Shelbourne were showing the necessary attitude and application.

The match then lacked urgency and incident for a spell as Shels seemed content to disturb Pat's' passing patterns.

But despite Shels' high energy levels they were fortunate to escape a real scare in the 35th minute when Ger O'Brien curled a delightful effort wide as the visitors suddenly started to offer glimpses of their ability.

Five minutes before the break a right wing John Russell cross located Chris Forrester, who headed over under pressure in the area.

Pat's, though, were much improved after the restart and they hit the front in the 53rd minute when Fagan expertly headed home an inviting Ian Bermingham delivery.

Liam Buckley's charges were now dictating the pace of the contest and they added a second goal in the 59th minute.

Russell made the initial dart crossing for Brennan, who extracted a fine save from Ger Hanley, but Fagan cooly converted the rebound.

Pat's scored again on 77 when Forrester applied the last touch following a wicked Brennan corner as the Saints were in cruise control.

Shelbourne full back Jack Memery was sent off on 79 for a high challenge on O'Brien and from then to the end the hosts were simply in damage limitation mode.