Sweden superstar Zlatan Ibrahimovic says he is prepared for anything Ireland might throw at him in tomorrow's crucial World Cup qualifier in Stockholm.

Ibrahimovic, who scored four goals against England in a friendly last November, is the obvious threat to Ireland as they seek vital Group C points in the freezing Swedish capital.

Ireland captain Robbie Keane this week joked his team-mates may need to "try to kick" the Paris St Germain striker "as far as we can" at the Friends Arena.

Ibrahimovic, whose combined career transfer fees total more than £130million, said: "I am prepared for everything. If the opponent has to do everything to stop the other team, that is what we have to do also.

"Let's see how the game will be. Hopefully it will be a nice game and lots of people enjoy it."

Ibrahimovic, 31, has a mutual respect for Ireland's most recognised player and record goalscorer Keane.

The much-travelled Keane, who now plays his club football in the United States with Los Angeles Galaxy, has scored 54 international goals in 122 appearances for his country.

Ibrahimovic said: "I think Robbie Keane is a good player. "He has had a good career and is over in America now.

"He has been very important for the national team. He is a dangerous striker and a player to watch out for."

"I expect a tough game tomorrow and they always, in my opinion, play with their heart for the green shirt" - Erik Hamren

Ibrahimovic, speaking at a press conference to preview the match, was unimpressed by suggestions he is a different player for country than club.

Despite his qualities, the mercurial Ibrahimovic, whose past clubs include Barcelona, Juventus and both Milan giants, appears to have uneasy relationship with fans and other figures at the Parc des Princes.

When asked what the difference was by a French journalist, Ibrahimovic said: "No difference at all."

Germany lead Group C with 10 points from four games while Sweden and Ireland, who have played a game less, have seven and six points respectively.

With Austria a further two points behind, what many believe to be a battle for second place behind the Germans is a tight one.

Sweden came from 4-0 down to claim a remarkable 4-4 draw with Germany last October in an emphatic statement of their ability, but coach Erik Hamren is taking nothing for granted against Giovanni Trapattoni's men.

Hamren said: "I think Ireland are a really good team. I am full of respect for them.

"They played in the Euros last summer and if you see the away statistics from Ireland you can see they are a really tough team to beat.

"I expect a tough game tomorrow and they always, in my opinion, play with their heart for the green shirt.

"We are ready, the players are ready and I am ready. It will be a tough game and we need to be really good. We have set our goal to be that good.

"Then we will see what happens. They are only one point behind us. It is a really important game for us both."

The match is set to take place under the retractable roof at the Friends Arena.

Trapattoni had expressed a preference for it to be left open but with temperatures forecast to dip as low as minus nine degrees during the match, the Swedish Football Association wants to improve the experience for fans.

Hamren said: "I don't think it is a big problem for the players because they are running but for the supporters and for me and Trapattoni it is better to have it closed, then we don't have to have long stockings on.

"In my opinion let it be closed, it is going to be cold tomorrow. For those who are going to be paying a lot of money to see the game let them have it.

"If you don't have a roof you can't prepare for that but now we have it, why not use it?"

Live television coverage of Sweden v Rep of Ireland from 7pm on Friday 22 March on RTÉ Two and RTE.ie (RoI only). Live radio coverage on Game On on RTÉ 2fm and RTÉ.ie (Worldwide) from 7pm. 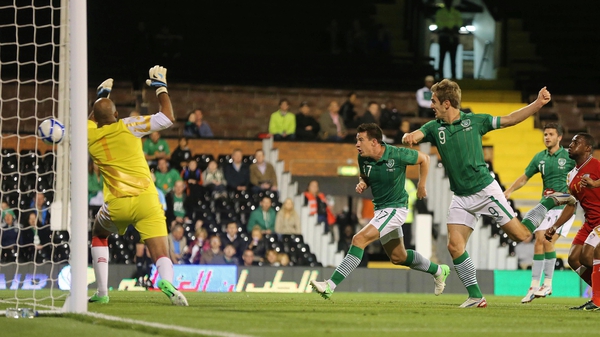