Gareth Bale came back to haunt Inter Milan once again as Tottenham romped to a very impressive 3-0 Europa League win over the Italian giants at White Hart Lane.

Bale grabbed the world's attention when he tore Inter apart in the Champions League.

Andre Villas-Boas warned Inter yesterday that the Welshman had improved immeasurably in the two years, four months and five days that had passed since the famous "Taxi for Maicon" night at White Hart Lane - and he was proven right tonight.

Bale nodded home Gylfi Sigurdsson's cross to put Spurs ahead after just five minutes and he set up Jan Vertonghen for the hosts' third after Sigurdsson himself had scored the second.

Bale missed two chances to match the hat-trick he scored in the San Siro two seasons ago, but in the end it did not matter as Spurs completely dominated a poor Inter team seemingly determined to get knocked out of the competition so they can concentrate on qualifying for the Champions League via Serie A.

Although questions will be raised about Bale going to ground too easily again after he was booked for diving, the fact that he will miss next week's return leg will not trouble Villas-Boas, who knows his side are all but guaranteed to be in the last eight of the competition thanks to tonight's result.

Bale, who now has 21 goals to his name this term, will take all the plaudits, but there was not one bad performance from a man in white all night.

Scott Parker, Sigurdsson, Vertonghen and Mousa Dembele in particular were all outstanding.

Considering three-time Champions League winners Inter are the most recognised name left in the draw, few would bet against Villas-Boas winning his second Europa League this year with Spurs.

All the pre-match hype had understandably been around Bale, but he started poorly.

The 23-year-old was teed up by Kyle Walker with barely 90 seconds on the clock, but he completely missed the ball when he swung his right leg at it.

There was nothing amiss about Bale's finish from his next chance, however.

Less than six minutes had gone when Sigurdsson shimmied past his marker and crossed for the Welshman, who beat Esteban Cambiasso to the ball and glanced home past Samir Handanovic.

Bale was in the thick of the action soon after, racing down the right before finding Jermain Defoe in space, but Handanovic saved well from the lively England striker.

Handanovic denied Bale in the 12th minute, but the Spurs man was the centre of controversy two minutes later when he was booked, not for the first time this season, for diving when he went down in the Inter box, earning his third caution of the competition. 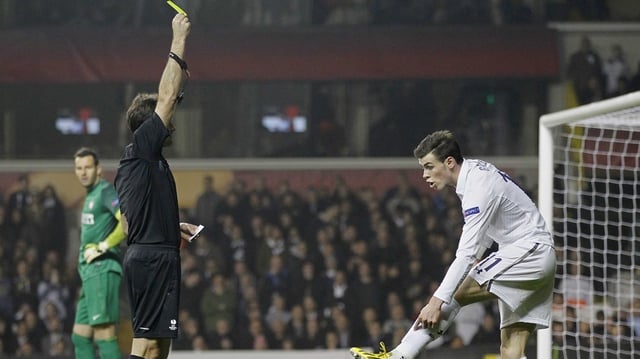 Inter could not get in to the game at all, aside from a shot over the bar from Antonio Cassano, recalled to the side after a row with manager Andrea Stramaccioni.

The hosts made their dominance count by adding a second after 17 minutes through Sigurdsson.

Handanovic spilled Defoe's shot after he got on the end of Lennon's cross and the Iceland international poked home from close range.

Bale continued to prowl on the edge of the Inter box while Dembele and Parker worked tirelessly in midfield to keep the visitors quiet.

Bale went close to adding a second, as did Sigurdsson, but Ricardo Alvarez then shot wide when he should have done better at the other end.

Stramaccioni brought on striker Rodrigo Palacio at the break and Alvaro Pereira fired wide - but Inter's renaissance was short-lived.

Spurs won a corner in the 52nd minute and Bale whipped over a cross which Vertonghen powered home from eight yards following a huge leap.

Bale went on one of his enterprising runs, holding off three Inter players before letting fly with a shot that crept just wide.

Defoe nearly found the net with a low drive that crept under Handanovic's body but deflected wide.

Bale, Walker and Lennon then galloped forward on the counter, but Defoe held on to the ball when he should have passed.

White Hart Lane fell silent as Palacio sneaked in behind the Spurs defence, but Friedel rushed off his line and saved superbly with his feet.

Spurs peppered the goal in their hunt for a fourth.

It never came, but it did not matter.

The "Taxi for Inter" chants that rang out around White Hart Lane told the story. 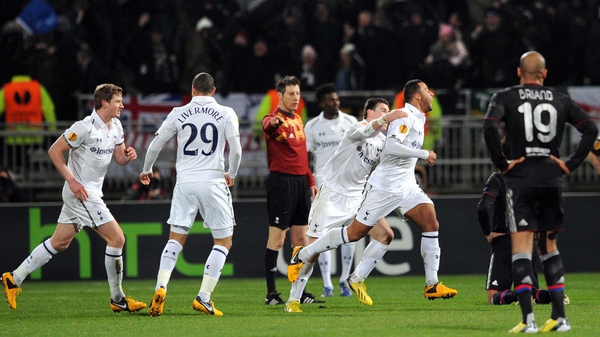