Aaron Lennon kept Tottenham's Champions League challenge alive as his side came from behind to win 2-1 at Sunderland.

Spurs trailed at the break to John O'Shea's first goal for the Black Cats despite having enjoyed the better of a first half during which striker Emmanuel Adebayor hit the bar from just two yards.

However, Carlos Cuellar's own goal three minutes after the restart gave the visitors a foothold, and they took full advantage with 51 minutes gone when Lennon sped through to beat keeper Simon Mignolet.

Had it not been for the Belgian's excellence, Jermain Defoe would have wrapped up the points on the hour with a shot from point-blank range which looked odds-on to end up in the back of the net, and he also kept out Adebayor's late effort.

Martin O'Neill's side battled manfully for a way back into the game, but Spurs held out with little difficulty to claim a second successive Barclays Premier League win on the road.

Sunderland could hardly have headed into the game with any more confidence having dispensed with champions Manchester City on Boxing Day to claim a third victory in four league outings.

On paper at least, today's fixture looked perhaps the more winnable of the two, but O'Neill was under no illusions as to how difficult a contest it would prove to be having seen Spurs dismantle former club Aston Villa in their last outing. In the event, two sides with a reputations for hitting teams hard and fast on the counter started relatively cautiously and genuine chances were few and far between during the opening 45 minutes.

As the half wore on, the Black Cats, who had hurt City in wide areas on Wednesday, worked their way into several promising positions, but Stephane Sessegnon and James McClean were able to pick out only Lloris with their final balls.

Tottenham began to shade the game in terms of possession and they created a series of openings.

Sandro could not extend Mignolet with a bouncing 21st-minute shot from distance, and Bale was similarly wasteful when presented with a headed chance by Lennon, who was giving makeshift left-back Matt Kilgallon a tough time.

In the meantime, Mignolet had rushed from his line to block Adebayor's flick after the strike had been played in by Sandro, but the Togo international should have put the visitors ahead on the half-hour.

Cuellar failed to cut out Jermain Defoe's curling shot, although he took the pace off it to allow Adebayor to get to the loose ball before Mignolet.

However, the strike somehow managed to hit the bar from just two yards and Sunderland were able to breathe again.

The home side created their first effort of note seven minutes before the break when Cuellar looped a header over from Adam Johnson's free-kick, and it was they who took the lead two minutes later.

Neither Stephen Fletcher nor O'Shea could make meaningful contact with Sebastian Larsson's free-kick as it sped towards goal, but after the Scot had seen his follow-up blocked by Lloris, the Republic of Ireland international, back in the starting line-up after illness, gleefully swept the ball into the unguarded net. O'Neill's men returned in determined mood and the way Johnson went past Bale before seeing his cross hacked clear by Sandro might have proved inspirational.

However, their lead and optimism evaporated within six disastrous minutes.

There was an element of fortune about Spurs' equaliser when Cuellar headed a 48th-minute corner into his own net, but things went from bad to worse for the home side just three minutes later.

Lennon attempted to lay the ball off, but saw it hit O'Shea and bounce back to his feet, and he raced in on goal to beat Mignolet despite Kilgallon's best efforts to apprehend him.

Spurs should really have ended the game as contest on the hour when, with the Black Cats in disarray, Bale, who was later booked for diving, sprinted from halfway before picking out Defoe in front of goal.

The England striker had time to control before shooting, but as the entire stadium waited for the net to bulge, Mignolet pulled off a breathtaking save he had no right to make to keep his side's hopes alive.

Sunderland poured forward in the search for an equaliser, in the process leaving themselves vulnerable at the back, but neither side could increase their tally with Mignolet keeping out Adebayor eight minutes from time, and that proved more than satisfactory for the visitors. 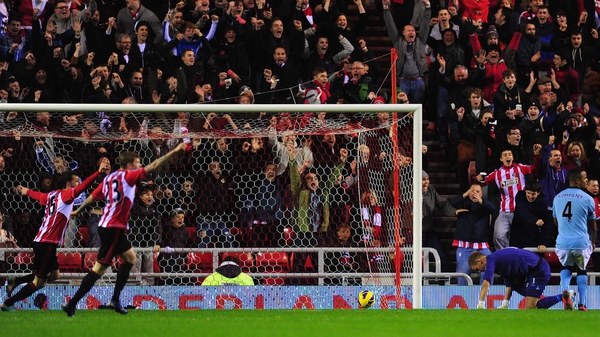