James McClean received the biggest cheer of the night at Craven Cottage, but it was debutant Robbie Brady who stole the show as he scored one and set up two more as the Republic of Ireland comfortably beat Oman 4-1.

Brady lit up the London friendly by crossing for Shane Long's opener early in the first half.

The winger smacked home a volley to make it 2-0 and he set up Kevin Doyle for the Republic's third while Alex Pearce added a fourth after Eid Al-Farsi had grabbed Oman's only goal.

McClean was also highly impressive during his 30 minutes on the pitch.

The Sunderland winger vented his fury at Giovanni Trapattoni after he was left on the bench during Friday's drab 2-1 win, and he showed the Italian just how devastating he can be during his cameo from the bench.

The 23-year-old look lively on the left flank so often occupied by Fulham and former Republic man Damien Duff over the years, and had it not been for Ali Al-Habsi in the Oman goal, the winger would have notched his first international goal and could have even had a second when he fired a sweet volley just over.

Even though Oman are ranked 53rd in the world, tonight's result and performance will do the world of good for Trapattoni.

The normally conservative 73-year-old urged his team forward throughout, and there were lively performances from Shane Long, Doyle, Seamus Coleman and Brady.

The win will give the former Juventus manager more confidence that he has the strength in depth to make the country's World Cup qualifying campaign a successful one.

Like in Astana on Friday, Ireland started brightly. Doyle peeled down the left and his cross flew towards goal off the knee of Mohammed Al-Balushi but Al-Habsi showed great reflexes to prevent an own goal.

A moment of hesitation from David Forde in goal almost cost Trapattoni's team, but the defence cleared their lines and the men in green found themselves in front after six minutes.

Brady pumped a 40-yard free-kick towards the back post and Sean St Ledger nodded back across goal for West Brom man Long to head home.

Ireland were 2-0 up after 22 minutes, however, when Seamus Coleman's cross was cleared into the path of Brady, who lashed home a low volley that beat Al-Habsi as he scrambled across his line.

Abdullaziz Al-Muqabli thought he should have had a penalty just before the half hour after going down under pressure from St Ledger but Andre Marriner waved play on.

Brady's incredible debut continued 12 minutes before the break when the 20-year-old sent over a peach of a flat cross which Doyle headed in from six yards to make it 3-0.

Trapattoni brought on Reading defender Pearce and Motherwell goalkeeper Darren Randolph at the break and Ireland remained in control.

Andy Keogh picked up Doyle's pass on the right wing and cut inside before firing a wicked curling shot that Al-Habsi athletically tipped wide.

Oman still looked confident going forward, however, and Randolph had to pull off a terrific diving save to deny Eid Al Farsi from 25 yards.

The loudest cheer of the night came when McClean came on for Doyle.

The Sunderland winger, his every touch greeted by a cheer, looked keen to make an immediate impression, beating Al-Muhaiyri to the byline, but his cross was hooked clear.

McClean almost scored his first international goal soon after when he fired a wicked free-kick over the wall that Al-Habsi saved brilliantly to his right.

McClean came within inches of making it 4-0 in the 69th minute when he smacked a peach of a volley just over Al-Habsi's goal after a pin-point pass from his Sunderland colleague Meyler.

Oman pulled one back after 71 minutes when Al-Farsi lost his marker and found some space in the box before shooting beyond Randolph.

Amad Al-Hosni almost scored another for the Gulf state when he beat Stephen Kelly but rippled the side-netting.

David Meyler, like Brady, wanted a debut goal and he almost got it seven minutes from the end when he smacked a fierce shot that Al-Habsi parried.

Two minutes later and it was 4-1. Substitute Aiden McGeady swung in a deep cross and Pearce leapt to head home from 10 yards.

In a worrying development for Nottingham Forest, Simon Cox hobbled off in injury time after suffering an ankle in injury from a heavy tackle, but otherwise it was smiles all around. 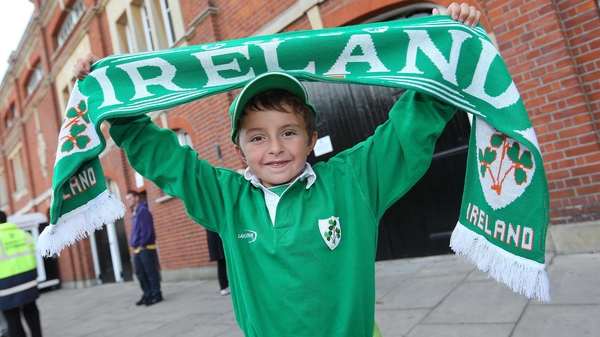