Didier Drogba became the first man to score in four FA Cup finals as Chelsea overcame Liverpool 2-1 at Wembley thanks to another massive goal-line controversy.

The Blues appeared to be cruising when Drogba scored at the start of the second half following Ramires' early opener, but the arrival of Andy Carroll turned the game on its head.

The burly Liverpool striker smashed home a superb goal not long after his arrival, then, with nine minutes left, rose to meet Luis Suarez's cross at the far post.

Carroll was convinced he had scored, with Suarez equally certain the ball had crossed the line before Petr Cech clawed it back onto the crossbar.

Linesman Andrew Garratt was not so sure - and those who had the additional advantage of television replays were mostly of the same opinion. Garratt could not signal the goal, so referee Phil Dowd did not give it.

And once another goalbound Carroll effort had been blocked in stoppage time, the Blues were able to complete their fourth FA Cup triumph in six seasons, and give Roberto Di Matteo his first piece of silverware as a manager.

There was no hint of the drama to follow when Ramires became the first Brazilian to score in this most prestigious of showpiece occasions.

When he first arrived on these shores two years ago, Ramires looked too slight to make an impact in England. Clearly though, he has guts, heart, drive and selfless determination.

If Roy Keane's endeavours for Manchester United in their Champions League semi-final triumph over Juventus in 1999 have gone down in history, then Ramires' performance in the Nou Camp 12 days ago deserves to go alongside it.

The yellow card he picked up means this will be the only cup final Ramires features in this season. And what a mark he made as Juan Mata slipped a pass beyond Jose Enrique.

The Liverpool full-back failed to recover his ground, allowing Ramires to bear down on the Reds goal.

Jose Reina elected to gamble rather than save the actual shot when it was unleashed. Reina chose incorrectly, diving to his right, allowing the ball to beat him rather embarrassingly at the near post.

Having fallen behind in both the semi-final against Everton and to Cardiff in the Carling Cup final earlier in the season, Liverpool had no need to fret.

What would probably have concerned manager Kenny Dalglish rather more was the way his team were outgunned in midfield.

It was not until the half-hour, when Steven Gerrard started to get in advanced areas, that the Merseyside outfit began to exert any influence on the game.

By that time Drogba, Frank Lampard and Salomon Kalou had all wasted half-chances.

Branislav Ivanovic, like Ramires banned from the Champions League final in Munich on 19 May, had done well to block a snap-shot from Craig Bellamy early on.

That was Liverpool's only opportunity though, until Suarez rose on the edge of the six-yard box only to nod Jordan Henderson's knock-back wide.

Unfortunately for Dalglish's team, their momentum was halted by the half-time break and before they could get into their stride again, Chelsea had doubled their advantage.

Out of contract in the summer and with Chelsea apparently unwilling to offer the two-year extension he has demanded, Drogba could be in the final throes of his Blues career.

If so, he will leave behind plenty of good memories.

When he found space on the left side of Liverpool's area and rattled a shot through Martin Skrtel's legs and into the far corner, he was scoring for the eighth time in as many Wembley appearances.

It prompted Dalglish into making his move, introducing his £35million portion of the £85million worth of striking talent that had been left on the bench, with Fernando Torres not starting for Chelsea.

And Carroll responded immediately, twisting John Terry around superbly inside the area before lashing his shot into the roof of Cech's goal.

The former Newcastle man then used his power to set up the much-maligned Henderson, who drilled a half-volley narrowly wide as those ageing Chelsea legs began to creak.

And Liverpool were convinced Carroll had levelled nine minutes from time when he rose at the far post to power Suarez's cross goalwards.

But the celebrations were cut short as the officials ruled Cech had clawed the ball out before it had crossed the line.

Even after half a dozen replays, there was no clear verdict either way, meaning the linesman, with one look, was in an impossible situation.

Carroll carved out one more chance, only for Terry to block, leaving Dalglish to reflect on the moment of controversy that denied him. 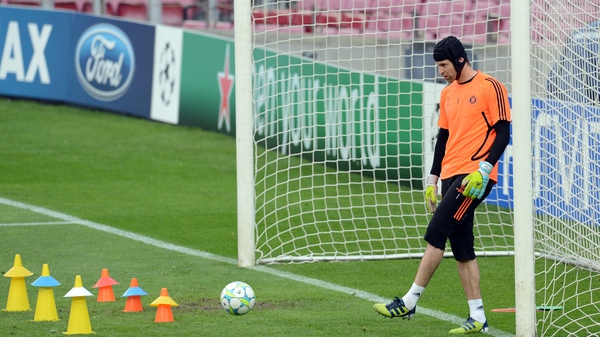 Petr Cech has revealed he will rely more on guesswork than homework should Chelsea's FA Cup final with Liverpool go to penalties.