Aston Villa central defender Richard Dunne will be sidelined for up to two months with a fractured right clavicle (shoulder), the club have confirmed.

A club statement confirmed: "Richard Dunne sustained a fracture to his right clavicle in the game against Manchester City.

"He will undergo an operation today in Birmingham. It is anticipated that he will be sidelined for up to eight weeks."

Ciaran Clark may also face a month on the sidelines due to a knee ligament injury sustained in training.

McLeish is concerned by the impact the absence of Dunne will have, with the defender expected by Villa to be out of action for around eight weeks.

"We're gutted to be losing the big man," said McLeish.

"He was trying to get us back in the game when he made a tremendous leap but, unfortunately, he landed badly on his shoulder and fractured the collarbone.

"He is a stalwart defender and has been that for the past dozen years or so in the Barclays Premier League.

"It's not good for us to be without such a top player and a defender of his massive experience.

"We wish Richard a speedy recovery and Ciaran, too, from his knee injury. We will look now for someone else to step up to the mark." 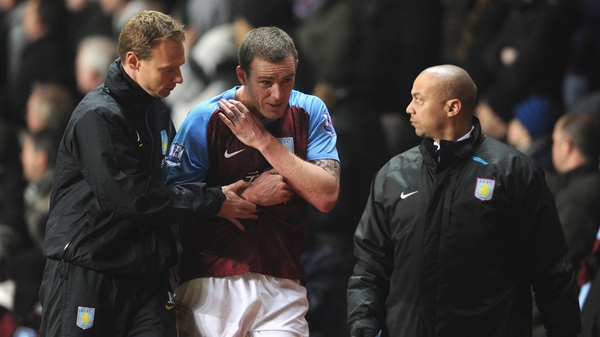 Dunne set to miss a month of action Soccer