St Patrick's Athletic have qualified for the third qualifying round of the Europa League after scoring a late 1-0 victory away to Maltese side Valletta.

Seconds after Darragh Ryan’s harsh dismissal in the 79th minute, Pat’s nicked a goal when O’Brien headed a Jason Gavin header to the back of the Valletta net.

It was a deserved victory for the Dubliners, who battled impressively in extremely hot conditions at the Centenary Stadium to secure a 2-1 aggregate win and a third qualifying round meeting with Krylya Sovetov Samara.

Having conceded an away goal in the first leg at Richmond Park last week, Jeff Kenna’s charges were under considerable duress, but they responded brilliantly.

Hampered by the blistering heat and completely aware that they had to rattle the Valletta net Pat’s required a bright start.

And that is precisely what Pat’s enjoyed as they passed carefully during the first half to frustrate the hosts.

However, Valletta did have the better opportunities with Gary Rogers denying Jordi Cruyff, Gilbert Agius and Jamie Pace, but Pat’s were distributing the ball well.

In the centre of the park Stuart Byrne and Gareth O’Connor were using their experience wisely, while Ryan Guy and O’Brien persevered in attack.

An hour in, Kenna summoned Alan Cawley from the bench to bring further subtlety to the Dubliners’ football, and the game became stretched.

Shortly after Cawley’s introduction Stephen Maher released O’Connor, who drew a save from Andrew Hogg.

Then a wicked Cawley free-kick caused panic in the Valletta defence as the Saints busily went in search of the lead goal.

Pat’s were in deep trouble when Darragh Ryan was red carded for a foul on Gijsbertus Den Ouden in the 79th minute, but they still attacked.

And they got their reward within a minute when Gavin’s sweet cross from the right located O’Brien, who provided the close range finish to send the Saints into the third qualifying round.

They will host Krylya Sovetov Samara at Richmond Park on 30 July, and will travel to Russia for the second leg on 6 August. 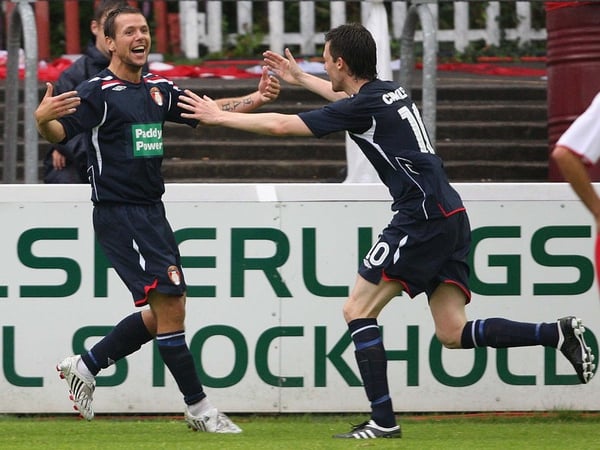