The spoils were shared at the Carlisle Grounds as ten-man Dundalk hung on for a point.

But Bray were denied by the cross-bar and post on four occasions as they remain unbeaten at home this season.

The match sprang to life right before half-time, as the away side took a 42nd minute lead when Declan O’Brien bagged his first for the club.

From a throw-in near the right-hand corner flag, George O’Callaghan tried his luck from distance and former Drogheda United favourite O’Brien was on hand to divert the ball into the far corner of the net with a back-heel flick.

But Wanderers levelled in stoppage time when Jake Kelly beat the offside trap and latched onto Dave Webster’s through ball.

He side-stepped full-back Shaun Kelly and then tried to go past Simon Kelly, but the central defender controlled the ball with his arm after the sliding tackle.

Referee Anthony Buttimer was in close attendance to award the penalty and Jake Kelly sent Ryan Coulter the wrong way from the spot.

There were other chances earlier in the game and when Webster’s sixth minute cross-field ball missed everybody, Jake Kelly burst into the box.

His low miscue fell kindly to John Flood who poked goal-wards from six-yards.

The ball looped onto the cross-bar before being scrambled clear.

The Louth club hit back in the 17th minute, as O’Brien appeared to handle before picking out Harpal Singh wide left.

His end-line delivery found O’Brien, whose back-post header cannoned off the upright.

Jake Kelly created space for himself to send in a cross, which Flood smashed off the bar again from a close-range header.

Bray were thwarted again in 67th minute by the upright.

Wanderers were to curse their luck even more in the 81st minute.

Mulroy’s flick off a throw released Paul Byrne, but his shot cannoned off the near post.

The visitors were then reduced to ten men as Simon Kelly was dismissed in the 84th minute for two bookable offences in quick succession for fouls on Gary McCabe.

Bray almost won it in injury time, when this year’s Irish Schools player of the year Mulroy evaded Thomas Heary and was clean through, but debut keeper Ryan Coulter produced a fine save. 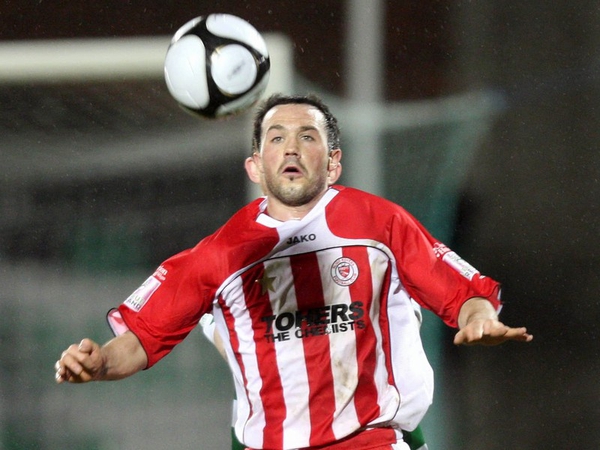