Shane Robinson's late penalty earned champions Drogheda United a share of the spoils with Sligo Rovers after a goalfest at the Showgrounds.

An action-packed first half produced five goals, with Brian Cash twice putting Rovers into the lead only for the visitors to twice pull level, with former Rovers favourite Fahrudin Kuduzovic on the mark on his first return to the Showgrounds.

But Raffaele Cretaro put Rovers in front for the third time in first half injury-time and this looked like it would prove the winner until Robinson's 88th minute spot-kick.

Rovers fans have endured four games without seeing their side score, but the wait wasn't prolonged as the home side took the lead in the eighth minute.

The impressive Romuald Boco caused trouble down the left before swinging in an inviting cross that Richie Ryan smashed off the crossbar with a crisp volley. Cash was on hand, however, to fire to the net.

Kuduzovic provided a dangerous cross into the area as Drogheda gave as good as they got in the opening exchanges, but Rovers keeper Richard Brush showed a safe pair of hands.

There was little he could do to stop Shaun Maher pulling the champions level on 35 minutes though, as the centre-back was left unmarked to powerfully direct Ollie Cahill's free-kick to the net.

But Rovers' response was instantaneous, with Cash heading home from inside the area after Boco had again created the opening down the left.

But Drogheda pulled level again when Kuduzovic fired home the rebound from inside the area after Brush had pulled off a fine save to deny Declan O'Brien.

Once again, however, Rovers bounced back, with Cretaro skilfully breaking into the area on the right-hand side before smashing the ball into the far corner.

The second half proved equally competitive, although both defences tightened up and chances were fewer and far between.

Kuduzovic nearly brought Drogheda level again on 58 minutes with a brilliant snapshot that was destined for the top corner until Brush intervened.

Boss Paul Doolin sent on Ibrahima Iyane Thiam two minutes later, but it was Robinson that earned the champs a point with three minutes remaining, after a Rovers player was adjudged to have handled in the box.

Rovers did manage to get the ball into the net one further time in the final minute, but Conor O'Grady's effort was ruled out for offside. 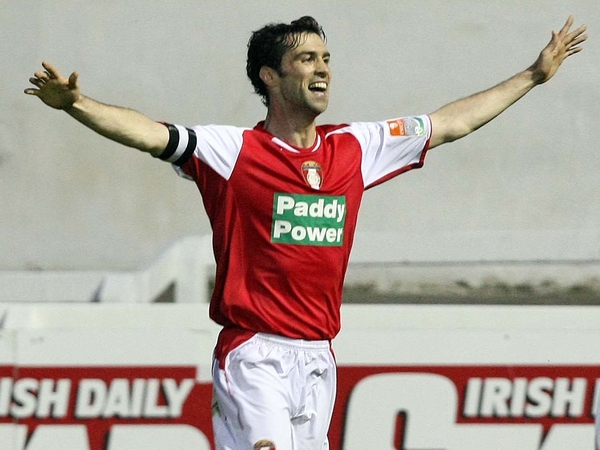