Bohemians have one foot in the next round of the UEFA Intertoto Cup after this emphatic home win over League of Wales side Rhyl at Dalymount Park.

It really was a game of two halves with Rhyl dominating the first period and Bohs powering all over them in the second 45.

Jason Byrne, Owen Heary, Killian Brennan, Neale Fenn and Glen Crowe got the goals for The Gypsies whilst Ken Oman also made it onto the scoresheet having had the last touch on the ball before it rolled over the line for Rhyl’s opener.

Rhyl, beaten 4-1 by an English colleges XI midweek, started well but Mark Lloyd-Williams should have done better on seven minutes when he spotted James Brewerton free but squared his ball into the box.

Seconds later Neale Fenn had the first shot on target but Rhyl 'keeper Lee Kendall made the save.

Craig Jones failed to connect with the follow up.

Rhyl always looked like scoring first and that's what they did on 25 minutes when midfielder Mark Connolly put the ball past Murphy from inside the area after a scramble in the box.

Lloyd-Williams and Jones, along with Oman, were involved and it was the unfortunate Bohs man who got the final touch before the ball crossed the line.

Boss Pat Fenlon must have given his side a serious half-time talk because Bohs came out a changed side for the second period and steamrolled over Rhyl.

The equaliser finally came on 52 minutes when George Horan took down Stephen O'Donnell.

Byrne slammed the free-kick past Kendall and Bohs then went ahead on the hour mark when Heary met a corner from Fenn and powered a terrific header past Kendall into the top left corner of the net.

It got better for Bohs just three minutes later when Kendall took Brennan down in the area.

Referee Jouni Kietala pointed to the spot and Brennan dusted himself off and calmly stroked the ball into the bottom left corner.

Fenn added number four for Bohs on 72 minutes following good work in the centre from Brennan.

Crowe then beat the Rhyl offside trap to stroll through on 81 minutes and finish off a perfect night for Bohs.

The return leg takes place a Belle Vue in Rhyl at 2.30pm next Saturday afternoon. 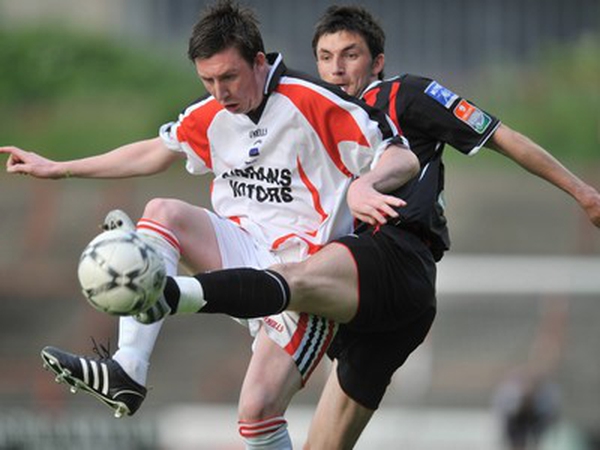