Georgios Samaras pointed to Greece's shock Euro 2004 triumph as evidence Celtic can make it through to the quarter-finals of the Champions League by overcoming Barcelona.

The Parkhead squad travelled to Spain on Sunday afternoon ahead of the second leg of their last-16 clash with the Catalan giants at the Nou Camp on Tuesday night.

Frank Rijkaard's side looked impressive winning 3-2 at Celtic Park in the first leg and Hoops boss Gordon Strachan admitted he would not put his house on his side getting through to the last eight for the first time.

But 23-year-old Greece striker Samaras - on loan from Manchester City - believes his compatriots' achievement four years ago, which took the game by surprise, means nothing in football is impossible.

However, Samaras knows an away win - which Celtic have yet to achieve in the competition - will not be easy.

‘If you don't dream about your life, you won't have targets. The way Barca play is phenomenal, we saw in the first game how they pass the ball.

‘One thing we must do is try to press them more, so that we can have the ball more than we had in the first game. But we are going to Barcelona to enjoy the game.

‘We are going to attack, to pass the ball, to run and do everything we can - you never know what can happen.’

Celtic flew out to Spain on the back of Saturday's 2-0 Clydesdale Bank Premier League win over Hibernian at Easter Road, which kept the champions four points behind leaders Rangers.

Samaras came on as a second-half substitute for Jan Vennegoor of Hesselink and scored the clincher with his second touch, heading Aiden McGeady's cross past Hibees' goalkeeper Andrew McNeil.

Samaras was open enough to admit his decision to sign for the SPL champions was made to help him get into the Greece squad for this summer's European Championships.

He said: ‘I wanted to play games to help Celtic win the league and thought Celtic could help me to go to the finals in the summer.

‘I am really happy at the club and am looking forward.

‘It is up to the manager if I play. I want to help the team but it is not up to me. The only thing I can do is train hard and prove that I deserve to be in the team.’

The Greek has been impressed with Scott Brown, who will start in the Nou Camp after being suspended for the first leg at Celtic Park.

He said: ‘He is an important player and a player who gives us a lot of energy in the midfield. When you don't have Brown in the team, the quality goes down a little.

‘I think he was on fire against Hibs, he had a great game and deserved to be man of the match.

‘When I first saw him, I thought he was the second Joey Barton because of his energy, but Brown is more clever, believe me.

‘He could easily play in the (Barclays) Premier League with his energy.’ 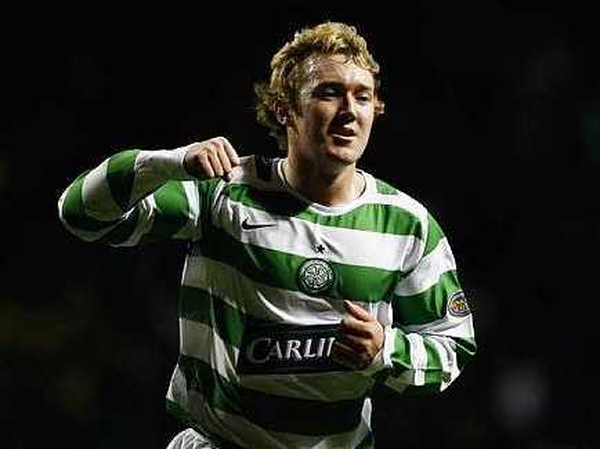