International football chiefs were today warned against creating a situation where unionists in Northern Ireland play for their country and nationalists play for the Republic of Ireland.

Northern Ireland Sports Minister Edwin Poots made the appeal to Fifa following concerns that world soccer's governing body may allow young players north of the border to play for the Republic.

As he prepared for an Assembly debate tomorrow on the issue, Mr Poots told members it would be a travesty if the cross-community nature of the Northern Ireland team were to be sacrificed by the eligibility rule.

After DUP Assembly member Jim Shannon raised concern during Assembly questions about the rule, the Stormont Sports Minister told his colleague: ‘It is public knowledge that I have already written to Fifa, I have offered my support for the Irish Football Association and will take their advice on this particular matter.

‘But I should say that in Northern Ireland over the years and over the worst period of the Troubles we have had a team made up of both sections of the community.

‘The Northern Ireland football team can look back on many great players from both sides of the community including the likes of Pat Jennings, Martin O'Neill, Pat Rice and Sammy Nelson to more up-to-date players like David Healy and Steve Davis who cross the political and religious divides.

‘I think it would be hugely unfortunate if others were to interfere with something that has been successful and something which has brought our community together.

The Irish Football Association has been lobbying Fifa to bar players from Northern Ireland turning out for the Republic after Derry-born on-loan Wolves midfielder Darron Gibson lined up for the Republic of Ireland.

Gibson switched sides after representing Northern Ireland at under-16 level.

Assembly members will tomorrow debate an Ulster Unionist motion warning if players are allowed to switch sides it could undermine soccer relationships on both sides of the border.

A petition of concern has, however, been tabled in the Assembly by nationalists forcing a cross-community vote for the motion. 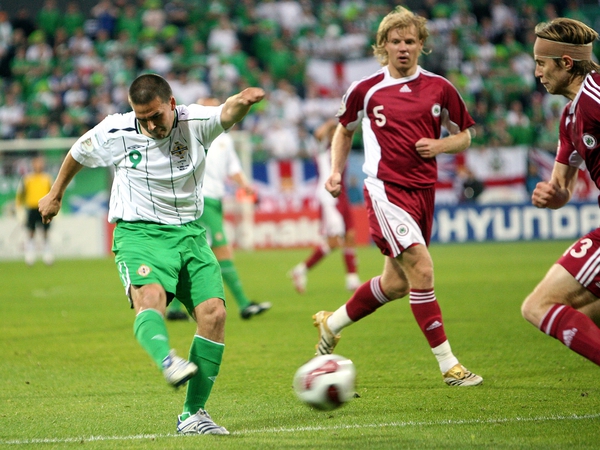